Everything is different at Arsenal, and the only things left standing from the Wenger era are the walls 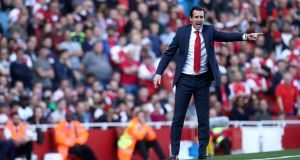 Arsenal manager Unai Emery: his team will never play long; they will always build from the back. Photograph: Yui Mok/PA Wire

Back when Arsenal was the personal fiefdom of Arsène Wenger, the players would finish training and sometimes feel they could do it all again. Modern professionals are supposed to need a sleep after training. Wenger’s usually did not.

It is a different story now. Under Unai Emery the players know they have worked, and they certainly sleep. It is one example of the shifting sands at the club, but, when the broader picture is laid out, it adds up to revolution.

“It feels like a new club,” full-back Hector Bellerin believes.

A widespread view has taken root. The only things left standing from the Wenger era are the walls.

Emery is not the most obvious revolutionary, but his methods and character contrast so sharply with those of Wenger that he appears like one. In terms of training, match preparation, communication, mentality and the approach to player development and care, everything is different.

What’s more, there is a good feeling in the dressing room. Everybody knows what would have happened if the team had lost back-to-back fixtures at the start of the season under Wenger. But when they did under Emery – against Manchester City and Chelsea – there was no panic.

Equally, after eight subsequent wins on the spin in all competitions, and going into Sunday’s Premier League trip to Fulham, there has been no rush to acclaim Emery as the best thing ever. The mood is balanced, quietly optimistic. Perhaps there has been a reaction to the wild emotions of the final part of Wenger’s tenure.

People do not know what to make of Emery, and by saying nothing at his press conferences he has given them no chance to pass any judgment on his personality. The Spaniard remains under wraps and it feels entirely calculated. People are trying to work him out. Emery, meanwhile, is just working.

It is what he does, and has always done, since his first job at Llorca in Spain’s second division B in 2004-05.

“I’m not the kind of coach who says: ‘Let’s do a few piggy-in-the-middle exercises and go home for lunch’,” Emery once said. “I was a second division B player and I’ve had to work very hard. I tell the players: ‘The moment we stop working hard on this, as soon as we stop dedicating hours to this, we’ll fall’.”

It is not only what Emery does in training at Arsenal but when and where. He is obsessed by the small details, and he will train on the day before a game at the same time as the kick-off, or as close to it as possible if it is an evening fixture. Before home league matches he has looked to train the day beforehand at the Emirates Stadium.

Emery’s sessions are far more tactical than those of Wenger, and he has tried to instil his pressing system together with bespoke patterns of play. His idea is that the players should be able to close their eyes and know where options A, B and C are, before choosing the most progressive one.

He wants to “generate superiority” – in other words, have a man over in certain areas of the pitch – and he likes players who can play in more than one position. Emery’s Arsenal will never play long; they will always build from the back, and although his structures are not rigid there is structure all the same. Can floating players fit in such as Aaron Ramsey? The club’s decision to withdraw its offer of a new contract to the attacking midfielder advertises the answer.

Wenger’s priority was for his players to have the emotional freedom to express themselves and the common criticism of him was that he would pay zero attention to the opposition.

It was all about what his team would do; playing the Arsenal way, which was essentially the only way. Wenger would always be convinced that this would work, and when it did not there was genuine bemusement.

Emery is more flexible, and a mark of his early weeks has been his ability to turn the tide of games going against his team. The 2-0 home win over Everton two weeks ago was a prime example. Arsenal did not connect in the first half – they are still coming to terms with Emery’s demands – and they needed a string of saves from Cech to keep them at 0-0.

But Emery made adjustments at half-time and they worked. “We were better positioned on the pitch for attacking moments and we helped each other more,” he said.

The obvious criticism involves the question of why Emery cannot get it right at the outset, but these are glass half-full times. Emery’s reading of games is one of his strengths. Ten of Arsenal’s 14 league goals have come in the second half of matches.

Emery’s preparations are meticulous. They are tailored to each opponent, with the use of video analysis key, and they begin with an hour-long debrief from the previous game. On a big screen every mistake is pinpointed, along with the good bits. Players are encouraged to see why a particular option is best – “if this pass is played, it will open up here and here; this teammate has been told to stand there for you”.

Post-match, players will get statistical breakdowns on their performances. Before the next game, in addition to the hour-long group video session, players can receive one-on-one briefings and information on their direct opponents.

At his previous clubs Emery edited the clips himself. “For every game we play, I might have spent 12 hours working on the video alone,” he said in 2015, when at Sevilla. “In an hour the players have to understand everything you have seen in 12 hours.”

Spanish winger Joaquin played under Emery at Valencia. “He put on so many videos I ran out of popcorn. He’s obsessed by football. It’s practically an illness.”

Emery has demanded that the squad have lunch together, and he has made it plain that his door is always open. “Clarity” is a buzzword. The club takes regular blood tests from the players, and has been keen to explain the results in detail to them.

Yet it is the results on the field that matter the most. Emery is building momentum.