Rafael Benitez says ‘everything’ is wrong at Newcastle

‘Fans have to be concerned, we are concerned,’ he said about off-pitch matters 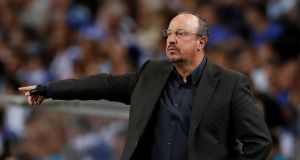 Rafael Benítez’s tenure as Newcastle’s manager looks to be reaching a pivotal moment after he claimed “everything” is wrong behind the scenes at St James’ Park.

“When things are not going well off the pitch you can see a reflection on the pitch,” said Benítez following Wednesday’s 4-0 friendly defeat at Braga in northern Portugal. Pressed as to whether he was referring to recruitment at a club showing a profit on summer dealing he replied: “Everything – I’m really worried.”

Benítez is concerned about the depth of his squad and remains desperate to sign a central striker – ideally West Brom’s Salomón Rondón –- as well as a No 10, a centre-half and a left-back, but asked if there was money to spend or any deals were close he said: “I have no idea. The fans have to be concerned, we are concerned. I’m really worried.”

His anxieties are amplified by an unresolved debate between the players and the board over bonus payments but there appears to have been an erosion of trust between the manager and Lee Charnley, the Newcastle managing director who serves as a conduit between Mike Ashley, the club’s owner and Benítez. “We can talk [he and Charnley] and be close [to making signings] but after we are not so close,” he said. “I think we still need three or four players.”

Benítez is a practised politician but he sounds at the end of his tether, with his latest complaints running much deeper than merely being a case of a manager putting pressure on his board before the closure of a transfer window.

He is now entering the final year of his contract on Tyneside and is refusing to sign the new deal Ashley has offered him until assurances over transfer budget and improvements to the under-23 set up, academy and training ground are met. The former Liverpool manager had initially thought he would have around £45m to spend but has since been instructed he would have to operate under a sell-to-buy policy.

So far this summer Newcastle have sold Mikel Merino to Real Sociedad for £10m, Aleksandar Mitrovic to Fulham for £22m, Chancel Mbemba to Porto for £8m and Matz Sels to Strasbourg for £3.5m.

Incomings feature Martin Dubravka having made his loan move from Sparta Prague permanent for £4.5m, while Kenedy has also rejoined, on loan from Chelsea, Ki is now a midfield option after leaving Swansea on a free transfer and £3m was sufficient to transport Switzerland’s Fabian Schar from Deportivo de La Coruña to Tyneside. Meanwhile a £9.5m deal for Mainz’s Japan forward Yoshinori Muto was formalised on Thursday.

Benítez is particularly frustrated at Newcastle’s failure to meet Rondón’s £16.5m release clause but the striker is nearly 29 and Ashley does not like signing players over 26 because he feels they become depreciating assets. A compromise was reached whereby Rondon would have been part exchanged for Newcastle’s Dwight Gayle but Gayle does not want to leave.

While Benítez is disappointed to have lost a key ally in his former press officer Wendy Taylor, who has joined the Football Association where she will work alongside Phil Neville and the England women’s team, he hopes to keep his captain and centre-half Jamaal Lascelles who is interesting Everton. With Florian Lejeune out for most of the season with a ruptured cruciate ligament and Mbemba now at Porto, retaining Lascelles is a priority. “I don’t think we’ll lose any players at the moment,” Benítez said. “But I can’t say too much.” – Guardian service