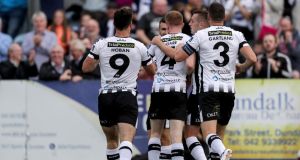 Goals in either half from Sean Hoare and Patrick Hoban were enough to give Dundalk their 11th straight league win – a new club record – and propel them one point ahead of Cork City at the top of the SSE Airtricity League table. The result also leaves Bohs just four points above the relegation playoff spot.

Stephen Kenny’s side fly to Cyprus on Tuesday for their Europa League showdown with AEK Larnaca but the Lilywhites boss resisted the urge to tinker with his starting XI.

Dean Jarvis – a straight swap for Dane Massey – was the only change to the side that drew 0-0 with the Cypriots in the first-leg just 72 hours earlier.

Keith Long’s side made the trip north buoyed by a 6-0 win over Bray Wanderers nine days earlier and Daniel Kelly, who scored twice in that fixture, tested Gary Rogers with the game’s opening chance in the eighth minute.

The Gypsies looked relatively comfortable for long periods in the first-half and with the hosts operating well below-par, they continued to pose the Dundalk back four a number of problems.

The magnificent Chris Shields had to get back and stop Dinny Corcoran in his tracks after the striker robbed Brian Gartland and headed for goal and the midfielder had to clean up again before the break when Kelly beat Daniel Cleary and lifted the ball over Rogers.

Dundalk took time to shake Thursday night’s exertions from the legs and both Michael Duffy and Hoban fired wayward efforts over the top but they went in ahead at the break thanks to Hoare’s 31st-minute header from a Duffy corner.

All of Bohemians’ good work was undone six minutes after the restart when Jarvis was taken down by Dan Casey in the penalty area after combining well with Duffy on the left. Hoban made no mistake, sweeping home goal number 21 of the season.

Number 22 almost followed minutes later but Supple stood tall and it was Bohs who almost finished with a flourish with substitute Keith Ward unlucky to see a crisp drive come back off the post in the dying minutes.