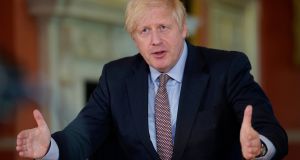 The Premier League faces a week of chaos after hopes of a British government direction on Project Restart were dashed by prime minister Boris Johnson.

A week ago expectations for a green light had been high after positive noises from senior politicians on the return of sport. But as the league convenes another extraordinary meeting of its 20 clubs on Monday morning, they are no closer to being given official clearance to resume playing.

Addressing the nation on Sunday night, Johnson did not mention professional sport or its resumption. This despite remarks from the culture secretary, Oliver Dowden, two weeks ago that the Premier League should return “as soon as possible”. The league has always insisted it would be led by government on any resumption but that guidance on the return of professional sports, from a working group led by the UK Sport chief executive, Sally Munday, is still being written.

A virtual meeting had been scheduled with clubs for last Friday, the day after the British government was due to review lockdown restrictions. When the prime minister confirmed an address for Sunday night the Premier League agreed to convene on Sunday.

The meeting will take place with no new information bar a general instruction from the prime minister that people should “work from home if you can . . . but you should go to work if you can’t work from home.” The only mention of the word sport came with reference to playing outside with “members of your own household”.

The meeting will bring together clubs increasingly at loggerheads over several key issues. First among the concerns remains the safety of players, staff and all those associated with plans to play the remaining 92 fixtures of the 2019-20 season.

The league’s medical protocol remains unfinished, but a draft is expected to be presented to clubs before further discussions with the League Managers’ Association and the Professional Footballers’ Association take place later in the day.

If the medical protocol is agreed upon, it will likely be put to a vote later in the week, with the timescale currently assigned to Project Restart requiring a return to group training by May 18th.

It is not the only issue that is expected to provoke fierce debate however, with player contracts and the use of neutral venues to resolve the season also set to take centre stage in what is expected to be a lengthy meeting. – Guardian

Ireland-based Stephen Kenny can offer FAI welcome stability 06:00
Felipe Contepomi: Lockdown a double-edged sword for the likes of Johnny Sexton 06:00
Sonia O’Sullivan: Running in a bubble as the shoe wars raged 06:00
Joanne O’Riordan: Return to play is fraught with perils and possibilities 06:00
Stephen Kenny undaunted as a bold new era beckons for Ireland 06:00