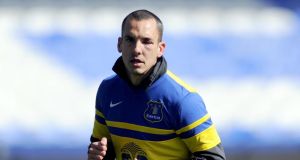 Leon Osman is an injury concern for Everton.

Palace manager Tony Pulis hopes to have a fully-fit squad to choose from. Dwight Gayle returned from an ankle injury to score five goals in an under-21s fixture against Brentford on Wednesday night but the young striker is not considered ready to start.

Striker Gabriel Agbonlahor and midfielders Fabian Delph and Karim El Ahmadi missed last weekend’s 2-1 defeat for Villa at home to Fulham either through illness or injury, but all have trained this week and should return to the starting line-up. Villa boss Paul Lambert remains without six long-term injured in Christian Benteke, Libor Kozak, Charles N’Zogbia, Jores Okore, Nicklas Helenius and Gary Gardner.

Defender Michael Turner and Leroy Fer could be in contention to return for Norwich after recovering from hamstring injuries and Wes Hoolahan is expected to be included in caretaker manager Neil Adams’ first starting XI since he succeeded the sacked Chris Hughton last Sunday. Defender Sebastien Bassong should be fit following a knock, but Elliott Bennett (knee) is again involved with the under-21s.

Southampton’s Jay Rodriguez will miss the next six months after rupturing his anterior cruciate ligament and could be joined on the sidelines for Cardiff’s visit this weekend by several other first-team players. The England international suffered the injury during last weekend’s 4-1 defeat at Manchester City - a match which Gaston Ramirez (ankle) and Artur Boruc (back) missed through injury. The pair will be assessed before Saturday’s match, which back-up goalkeeper Kelvin Davis is likely to sit out due to a hip problem. Maya Yoshida (knee) is a long-term absentee.

Charlie Adam is hoping to play despite needing an operation on a broken nose. The midfielder suffered the injury in training but the club are hopeful he will be able to play wearing a mask. Fellow midfielder Stephen Ireland has recovered from illness but Matthew Etherington (back) is expected to join winger Oussama Assaidi and centre-back Robert Huth (both knee) on the sidelines. Newcastle goalkeeper Tim Krul could return having missed the last two games with a knee injury.

The Dutchman is back in training and could replace understudy Rob Elliot at the Britannia Stadium. Striker Loic Remy has also returned to training after his calf problem but will not be risked at Stoke, while full-back Mathieu Debuchy (groin) and midfielder Moussa Sissoko (hamstring) are still out.

Sunderland striker Steven Fletcher is unlikely to play again this season because of his ankle injury. The 27-year-old Scotland international has missed the last four games. Manager Gus Poyet is otherwise remaining coy over a series of minor knocks, but goalkeeper Keiren Westwood is still sidelined by a shoulder problem.

Midfielder Leon Osman is Everton’s only doubt. The 32-year-old had to have five stitches in an eye wound early in last weekend’s victory over Arsenal and as of Thursday his left eye had not fully reopened. Defender Phil Jagielka (hamstring) could be fit to return for next weekend’s visit of Manchester United.

West Brom head coach Pepe Mel’s hopes of fielding an unchanged side for the first time hinge on midfielder James Morrison’s fitness. The Scot is a doubt for Saturday’s clash with Tottenham with an ankle problem and may be replaced by fit-again captain Chris Brunt, who is back after ligament trouble. Claudio Yacob (hamstring) is fully fit again and Mel’s only other injury is to Zoltan Gera, who will miss most of the remainder of the season with a hamstring problem.

Tottenham will still be without six first-team regulars. Roberto Soldado has returned to training following a hamstring issue but will not be fit to travel while midfield pair Mousa Dembele (hip) and Etienne Capoue (foot) are also missing. Kyle Walker (pelvis) remains sidelined alongside Erik Lamela (back) and Jan Vertonghen (ankle).