Toffees come from behind to end poor run of league form 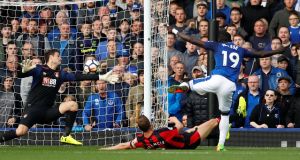 Former outcast Oumar Niasse was transformed into the comeback king with his first two Premier League goals for Everton as they came from behind to beat Bournemouth 2-1.

Twelve months ago the Senegal international was without a squad number, banished from the first-team dressing room and playing for the under-23s after manager Ronald Koeman decided on the basis of a 45-minute pre-season friendly appearance he was not up to the task. But with Everton’s failure to sign an adequate for Romelu Lukaku in the summer Koeman was forced to eat humble pie and recall the striker, a £13.5million signing by Roberto Martinez in February 2016.

After scoring in the midweek Carabao Cup win over Sunderland, Niasse came off the bench on Saturday to score twice in the final 13 minutes and turn around a game heading the visitors’ way after Josh King’s goal early in the second half. It capped a remarkable about turn in the fortunes of the 27-year-old, who last season was told to find a new club and trained with the u-23s without complaint before going to Hull on loan where he scored five times in 19 appearances.

A deadline-day move to Crystal Palace collapsed in the final hour in August as Koeman realised he could not sign the striker he wanted and Niasse’s rehabilitation began - although even the Dutchman could not have envisaged how quick an impact his previously unwanted striker would make.

Burnley and Huddersfield ground out a dreary stalemate at Turf Moor, but a point apiece kept both sides comfortably ahead of gloomy pre-season predictions. The resulted appeared to hinge on whether or not the home side’s £15 million striker Chris Wood could find a finish from a selection of half-chances but he was ultimately shackled by the Terriers’ exemplary centre-half Christopher Schindler.

It was, then, a triumph for the organisation and reliability that has taken two unfashionable clubs into the top half of the top flight, though the first top-flight meeting of these sides since 1971 is not an occasion many will revisit. The first half was a largely clumsy affair, certainly in an attacking sense, as heavy touches, mis-hit passes and inherent conservatism dominated proceedings.

Huddersfield’s only real attempt prior to the break saw Elias Kachunga spray high and wide from 25 yards but they bettered that within three minutes of the restart. Cork was robbed in midfield, with Tom Ince racing from the halfway line and dribbling away from three Claret shirts before laying off to Laurent Depoitre in the box. His shot was beaten back into the six-yard box by Nick Pope, with Ben Mee on hand to sweep up under pressure.

Burnley attacked most effectively down the left, Ward reaching the byline and picking out Wood at the near post. The New Zealander managed to negotiate a tricky angle and the attentions of Schindler to get a shot away but it was too soft to threaten Lossl. Huddersfield found some semblance of order in the final third as the minutes passed, Ince lashing just wide from 20 yards and substitute Rajiv van La Parra also missing by a fine margin as he dragged one across Pope.

But the Dutchman was also guilty of some sharp practice when he tumbled to the floor in search of a penalty against Matt Lowton, who did not make contact. Referee Christopher Kavanagh was not fooled and instead cautioned Van La Parra. Wood managed one more shot at goal, his first from outside the area, but Lossl scooped the ball safely to preserve his fourth clean sheet of the campaign.

Richarlison struck a late winner as Watford’s 2-1 victory gave them a first league success at Swansea since 1983. Luther Blissett and John Barnes were the scorers when Watford last won on Swansea soil.

But Andre Gray and the Brazilian Richarlison were the Hornets’ heroes this time after substitute Tammy Abraham appeared to have given Swansea a share of the spoils.

Abraham finished from close range after 56 minutes to cancel out Gray’s first Watford goal, but Richarlison brushed aside Alfie Mawson’s timid challenge in the final minute to finish off the underside of the crossbar.

Swansea had not managed an on-target attempt in three of their five league games and had not scored at the Liberty Stadium this season. Those obvious problems in front of goal were reflected in the first half, despite the re-signed Wilfried Bony starting a Premier League game for Swansea for the first time since December 2014.

Watford were the better side in the opening period and should have been ahead before Gray produced the first dividend since leaving Burnley last month.

Swansea abandoned their policy of playing three centre-backs and went with a flat back four as Roque Mesa and Abraham entered the fray to provide extra craft and power. Abraham’s impact was instantly felt as he headed over a Carroll corner before the on-loan Chelsea youngster claimed his third goal in eight appearances.

Jordan Ayew cleverly fed the ball into the box over his shoulder where Abraham missed his kick and Bony needed two attempts to stab the ball goalwards. But Gomes failed to hold Bony’s second effort and Abraham, following up as the Watford defence stood still, dispatched the loose ball into the net. Swansea searched for the winner after that and had the majority of the play, but Richarlison’s sucker punch inflicted a third straight home defeat on Clement’s men.