‘Paul loves playing for this club. He’s a Man United boy through and through’ 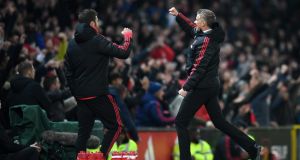 Manchester United caretaker boss Ole Gunnar Solskjær is enjoying watching Paul Pogba play with a smile on his face after the midfielder scored a brace in the 3-1 win over Huddersfield.

United made it two wins from as many matches since sacking Jose Mourinho and bringing in Solskjær last week.

Pogba was restored to the starting line-up under the Norwegian and has shone in both the 5-1 win at Cardiff and the St Stephen’s Day success against Huddersfield.

Solskjær — who previously worked with Pogba when he managed United’s reserves - was asked about the smile that had been seen on the Frenchman’s face and said: “That’s the Paul I know, the Paul I have known since he was in the reserves and in the youth team.

“He’s always been a happy boy, he’s always had a big smile on his face and when you score a goal, or if you score two, of course you’re happy. And when you play football for Manchester United you should be happy.

“Of course it’s a responsibility but it’s an honour and a privilege.

“Paul loves playing for this club. He’s a Man United boy through and through. He’s a kid that knows what it means to play for Man United.”

He added: “I’m spending time with the players of course, and trying to get as much time with each individual as possible.

“Paul is one that’s really enjoyed... Last time (against Cardiff) he creates two or three goals, this time he scores two himself. I think he’s enjoyed this today.”

After Nemanja Matic put United 1-0 up in the 28th minute, Pogba struck twice in the second half before Mathias Jorgensen’s late consolation for the visitors.

Solskjær said: “You don’t in one week change anything, but you change the mindset.

“I want my team to play in a certain way and you give them little pointers here and there, and it’s a work in progress.

“It’s going to take time for the players to go from one manager and the details he wanted. I’ve got a little bit of a tweak.

“We’ll improve as time goes on and I was just thinking, and I said to the staff as well towards the end, when you go 2-0 up, maybe 3-0 up, and you think ‘next week we’ll have (Alexis) Sanchez, (Anthony) Martial back, you’ve got (Romelu) Lukaku to put on’. Because I think maybe we could have really finished them off then.”

Martial and Lukaku missed the game due to illness and a private matter respectively.

Solskjær said Sanchez, who has been sidelined by a hamstring problem, was “touch and go” for the home clash with Bournemouth on Sunday and would be “probably definitely involved” in the match at Newcastle three days later.

Former United striker Solskjær received a superb reception on his Old Trafford return, and he said: “Extra special, of course it was, but I was surprisingly calm, I think the boys have settled me down really quickly.

“It was a great day that I’ll never, ever forget.”