Everton bounce back from Spurs beating by scoring five at Burnley 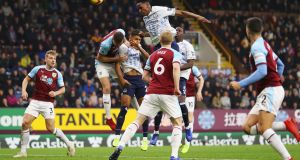 Everton, hammered 6-2 at home by Tottenham Hotspur on Sunday, took less than two minutes to grab the lead when the unmarked Yerry Mina headed in a cross from the left by Brazilian winger Bernard.

A curling Lucas Digne free kick beat Burnley keeper Joe Hart to double the lead in the 13th minute and nine minutes later Everton were 3-0 up.

Sean Dyche’s side pulled a goal back eight minutes before the break when a James Tarkowski header was pushed off the line by Jordan Pickford and Ben Gibson hooked the ball home.

But all Burnley’s labour towards an attempted comeback came to nothing after Digne made it 4-1 with a low drive from outside the box.

Brazilian substitute Richarlison completed the rout in stoppage time, collecting a fine through pass from Sigurdsson before slipping the ball home.

Meanwhile lowly Cardiff City survived intense pressure from Crystal Palace to pick up just their second away point of the season with a goalless draw at Selhurst Park.

Palace went into the game on a high after their surprise 3-2 win at champions Manchester City but their luck was out against Neil Warnock’s battling side.

Andros Townsend hit the bar in the opening minute from a promising position after good work from Wilfried Zaha and Cheikhou Kouyate.

Luka Milivojevic struck the post with a 77th-minute free kick for Palace, who had 31 shots but only five on target against the Welsh side.

The result left Cardiff one place above the relegation zone in 17th place while Roy Hodgson’s Palace are 14th.

In the early St Stephen’s day kick-off, Wolves midfielder Romain Saiss scored his maiden Premier League goal to deny struggling Fulham what would have been only their third victory of the season.

The Cottagers were leading through substitute Ryan Sessegnon’s second-half strike and six minutes from registering a vital win in their survival bid.

But Moroccan international Saiss had other ideas to snatch a 1-1 draw for the visitors and leave Claudio Ranieri’s side, who started the day in bottom spot, still deep in trouble.

Only three sides in Premier League history have avoided relegation having been bottom of the table on Christmas Day, and Fulham will have to improve at both ends of the pitch if they want to become the fourth.

The first chances fell to Wolves, when Adama Traore cut inside on his right foot but blazed his shot high over the crossbar, before Raul Jimenez’s attempted overhead kick also flew over.

But Fulham were the more threatening side in the first half with captain Aleksandar Mitrovic at his most menacing.

Mitrovic had an early shot blocked by Ryan Bennett before heading wide from a corner and planting another header straight at Wolves keeper Rui Patricio.

Cyrus Christie then played a clever one-two with Aboubakar Kamara and drilled the ball across the face of goal with Mitrovic inches from getting a touch at the far post.

Wolves were still a danger on the break, though, and Fulham keeper Sergio Rico had to be alert at his near post to keep out a fierce volley from Jimenez.

Both sides had reasonable claims for penalties, Wolves when Dennis Odoi handled a cross and Fulham after Andre Schurrle lifted the ball on to the arm of Bennett.

Five minutes before half-time Mitrovic should have found the net after he turned Conor Coady and Willy Boly inside out, but the striker’s finish was weak and Patricio was able to save.

Early in the second half Jonny Otto broke down the left and crossed for Jimenez, but his header was dealt with by Rico.

Sessegnon almost teed up Kamara but Boly just got a foot to the ball before the striker could convert a low cross.

The youngster made his mark soon after, pouncing at the far post through a crowd of players after Patricio punched Alfie Mawson’s header straight to him.

There was still time for Mitrovic to win it as he prodded the ball past the onrushing Patricio, but Coady got back to clear off the line.