Pep Guardiola: ‘The amount of goals we’re conceding is a big issue’ 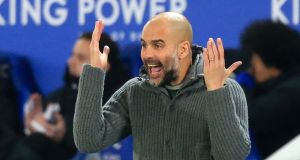 Pep Guardiola admitted that doubt could be starting to creep into the Manchester City camp following their 2-1 defeat at Leicester on St Stephen’s Day.

Successive Premier League losses have seen Guardiola’s team slip seven points behind leaders Liverpool and drop to third in the table behind Tottenham.

It is the first time in two years that City have lost back-to-back Premier League games and they have now suffered three defeats in four league outings, following losses against Chelsea at the beginning of the month and Crystal Palace last weekend.

City were unable to hold onto the lead given to them by Bernardo Silva as Marc Albrighton quickly equalised. Ricardo Pereira’s 81st-minute strike then proved to be the winner for Leicester.

“Now there will be doubts but we have to change the dynamic. I have to think about what the team needs and then try to win again.

“In football you are able to win a lot of games and lose a lot of games. We have to think about Southampton next and recover mentally.”

While City were dropping more points against Leicester, Liverpool were comfortably beating Newcastle 4-0 at Anfield to open up a potentially significant gap at the top of the table.

City host Jurgen Klopp’s side at the Etihad on January 3rd but Guardiola refused to look beyond the trip to St Mary’s on Sunday.

“The reality is we have lost three in four and to be real contenders we need to win again, so we focus on Southampton,” he said.

“We have made an incredible amount of points at this stage and if we can get the same, or more, in the second half of the season then we are fighting to win the championship. But at the moment, the reality is that two more teams are better than us.”

City have kept only one clean sheet in the last nine Premier League games and Guardiola admitted: “The amount of goals we are conceding is a big issue.”

Delph caught Pereira with his studs on the follow-through after a swipe at the ball and was shown a straight red card by referee Mike Dean.

For Leicester, the victory completed a superb Christmas return of six points from fixtures against Chelsea and City and Claude Puel’s team are up to seventh in the table.

“I must congratulate my players,” said the Foxes boss. “It was difficult to have the ball against this team and we put in place a good organisation and good work.

“We finished the first half with a lot of chances and I was a little afraid. But we managed to stay in the game and score again at the right moment.”

Last week, Puel was criticised for resting Jamie Vardy against City in the Carabao Cup defeat. After wins at Chelsea, where Vardy scored the winning goal in a 1-0 success, and City, Puel was asked if he thought his decision was now justified.

“Sometimes people don’t understand why we make rotation but it was possible because we made some changes in the cup game,” he said.

“I was happy with our performance against City in the cup and again today, and at Chelsea.”