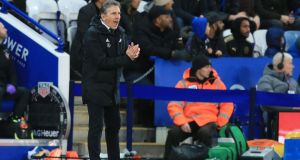 Leicester City have sacked Claude Puel as their manager after Saturday’s 4-1 home defeat by Crystal Palace and want to appoint Brendan Rodgers as his successor.

They are expected to make an immediate attempt to lure Rodgers from Celtic but are prepared to wait until the summer for the former Liverpool manager. It is questionable whether Rodgers would be willing to leave Glasgow mid-season while he has the chance to win an unprecedented third treble in three seasons in Scotland.

Leicester could also consider Rafael Benítez, whose contract at Newcastle expires in June, but they have made Rodgers their top target after months of succession planning.

The sacking of Puel follows a dismal sequence of results. The defeat by Palace was their seventh loss in nine matches and the last straw for Leicester, who informed the Frenchman that his reign was over.

“The club would like to thank Claude for his efforts in leading the team during his 16 months in the role and wish him well in his future career,” Leicester said. “Assistant manager Jacky Bonnevay also departs with the club’s best wishes.

“First-team coaches Mike Stowell and Adam Sadler, supported by the club’s established backroom staff, will assume responsibility for the senior squad while the club begins the process of appointing a new manager.” Leicester may try to make an interim appointment if they get signals from Rodgers that he is willing to take over in the summer.

The club host Brighton on Tuesday looking for their first win in any competition since New Year’s Day. That hapless streak includes elimination from the FA Cup by Newport County of League Two.

Puel had complained about “a crazy situation” in which positive performances yielded negative results because of bad luck and “inefficiency” that would eventually be ironed out. He pleaded for patience after fans booed his team off following Saturday’s defeat – their fourth in a row at home – but the club’s board decided the manager had already had enough time to try to arrest a worrying slide.

Although Leicester sit 12th in the Premier League, within reach of their minimum pre-season target of a top-half finish, an increasing number of supporters, and some players, lost faith in the manager’s ability to inspire an upturn.

Last week Puel held talks with Kasper Schmeichel to discuss claims made on television by the goalkeeper’s father, Peter, that the player wanted to leave. In the same interview the elder Schmeichel also said “[Leicester] have good players, they just don’t have a manager who can get the best out of them.” Puel said on Friday that Kasper indicated his intention to stay. Perhaps that is even more likely now Puel has left.

Puel’s departure marks a disappointing end for a manager who made a good first impression after taking over from Craig Shakespeare in 2017 despite the fact that his appointment did not meet with much support from people who said his style of play was so dull that Southampton had been right to sack him the previous season. Leicester fans eventually formed a similar view, although there were tantalising moments when Puel’s team played very well.

Even this season he oversaw excellent individual performances by young players such as James Maddison and Ben Chillwell and produced strong displays against the Premier League’s top teams, including Manchester City, whom they beat 2-1 on St Stephen’s Day.

Off the field, although most supporters never developed real affection for him, the manager was universally praised for the dignified way he represented the club following the tragic death of Vichai Srivaddhanaprabhain October.

Leicester’s persistent failings on the pitch, however, mean most Leicester fans welcomed the decision to oust him. Leicester have not won at home since that rousing victory over Pep Guardiola’s side, instead falling to defeats at the King Power by teams such as Cardiff City, Southampton and Palace. If, as Puel maintained, progress was being made, it was not happening fast enough. Leicester’s patience ran out. – Guardian service