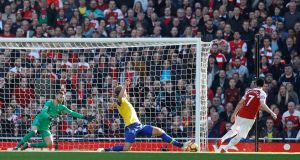 Unai Emery has to hope that this routine victory against Southampton can herald an injection of much-needed consistency in Arsenal’s pursuit of a top-four Premier League finish. The London club have followed victory with defeat without fail since early January but with Bournemouth next up at the Emirates Stadium on Wednesday night and their home form extremely good, they can sense an opportunity to construct the platform for a push.

The game was settled inside the opening 17 minutes, with Southampton particularly feeble during that period and ultimately unable to answer the goals from Alexandre Lacazette and Henrikh Mkhitaryan. The bonus came from Old Trafford, where Manchester United played out a stalemate with Liverpool, meaning that Arsenal leapfrogged United into fourth place.

Southampton had ended Arsenal’s 22-match unbeaten run in the reverse fixture at St Mary’s on December 16th but there was never any prospect of a repeat performance after the early goals that had Ralph Hasenhüttl boiling with rage on the sideline.

The visiting manager and his players had stewed on their previous result – the disastrous last-gasp home loss to Cardiff City – for two weeks and they had been determined to show greater solidity and ruthlessness. It did not happen and they have to consider Wednesday night’s visit from Fulham as a must-win game. After that, they face United and Tottenham. They remain third-from-bottom.

The tone of the afternoon might have been different had Nathan Redmond been able to capitalise after he ran clean through the inside-right channel in the fifth minute. He jinked inside and saw his low shot blocked by Bernd Leno but had the cut-back been on for Stuart Armstrong in the centre?

Arsenal went straight up to the other end to open the scoring and it was a goal that was marked by hesitation and slackness from a Southampton point of view. Jack Stephens appeared to have bundled over Lucas Torreira inside the area from Alex Iwobi’s cross and, as Southampton stopped, the referee, Graham Scott, allowed the play to continue.

Mkhitaryan took aim from the right only to slice his shot. But with Jan Bednarek slow to step up, Lacazette was onside in the middle and he flicked sweetly past Angus Gunn.

The second followed more sloppiness from the visitors and, in microcosm, showed why they are struggling down at the bottom. Stephens’s backpass was errant and put undue pressure on Gunn and he scewed the subsequent clearance to Iwobi, who tore back towards the area and crossed low. The ball took a slight deflection and broke for Mkhitaryan, who steered a shot into the near corner of the net.

Southampton came to be overwhelmed towards the end of the first-half and they were fortunate that the damage at the interval was not heavier. Lacazette covered his face with his shirt as he left the field because he could not believe how he had not taken more of his chances. Nor could the home crowd, particularly on 40 minutes when, having been teed up by Sead Kolasinac, the striker lifted over the crossbar from five yards. Lacazette also had a shot blocked by Bednarek and two other efforts saved by Gunn.

Matt Targett had extended Leno at 1-0 but Arsenal dominated the first-half chance count, with Granit Xhaka flashing a shot just wide from distance and Kolasinac having a penalty appeal turned down after his shot hit Oriol Romeu’s hand.

Hasenhüttl’s starting 5-3-2 system did not work at all and he changed things at half-time, withdrawing the hapless Stephens and going to a back four and bringing on two purer strikers in Charlie Austin and Michael Obafemi. Armstrong also made way. Unfortunately for Obafemi, he would be forced off 20 minutes later with a muscular injury.

Southampton raised the tempo, pressed onto the front foot and strained for a lifeline. It almost came when Xhaka erred with a dreadful ball across his own penalty area and James Ward-Prowse fizzed a shot just past the post. Arsenal were strangely passive in the second half, despite Emery’s exhortations from the technical area and his introduction of Mesut Özil and Pierre-Emerick Aubameyang.

The latter did go close on two occasions at the very end but the priority was to restrict Southampton and they managed to do that. Austin’s looping header was easy for Leno, Ward-Prowse had an effort blocked by Kolasinac and Leno turned away a long-ranger from Matt Targett. – Guardian service