A misunderstanding? Sarri and Arrizabalaga play down clash

‘I know the image, but I never intended to refuse to go off. It was only to say I was fine’ 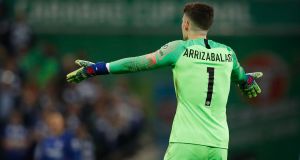 Kepa Arrizabalaga gestures toward the bench after his number came up for substitution. Photograph: Getty Images

Maurizio Sarri’s grip on his position as Chelsea’s head coach has been further loosened after Kepa Arrizabalaga appeared to undermine the Italian’s authority by refusing to be substituted before his team succumbed in a penalty shootout to Manchester City.

Sarri had attempted to replace Arrizabalaga, who had briefly gone down with cramp, with Willy Caballero as the final edged into the last minute of extra time only for the 24-year-old to protest when his number was raised by the fourth official. The world’s most expensive goalkeeper spoke with the Chelsea defender David Luiz but waved away calls from Sarri and his assistant, Gianfranco Zola, to leave the pitch while Caballero, who has a reputation as a penalty specialist, waited to be introduced.

The referee eventually spoke with the head coach on the sidelines before resuming play, with a livid Sarri flinging a water bottle into his seat in frustration, ripping his tracksuit top open, then storming toward the tunnel. He returned, still livid, seconds later to watch the last few moments of the goalless stalemate. Antonio Rüdiger seemed to restrain the Italian as he attempted to confront Arrizabalaga on the touchline as the teams prepared for the subsequent shootout, in which the goalkeeper saved from Leroy Sané but, critically, let a weak penalty from Sergio Agüero squirm under his body and in as Chelsea lost 4-3.

The incident came less than a week after Chelsea’s supporters erupted in open revolt over the head coach’s tactical approach, chanting “Fuck Sarriball” as they slipped out of the FA Cup to Manchester United, with that mutinous mood now effectively replicated out on the pitch. Both Sarri, encouraged by his team’s display even in defeat, and Arrizabalaga attempted to portray the furore as “a misunderstanding”, for all that the head coach admitted the player’s conduct had been poor.

“I was really angry, but I understood he had cramp, and I didn’t want the goalkeeper to go to penalties in that physical condition,” he said. “I realised the situation only after three or four minutes when the doctor arrived on the bench. I wanted Caballero on the pitch, but the goalkeeper wanted to let me know he was in condition to go to penalties. It was only a big misunderstanding. Kepa was right, but in the wrong way – wrong in the way he conducted himself, but mentally he was right because he was able to go to penalties. He was right for his motivation, but not for the conduct.”

Head coach and goalkeeper spoke post-match. “In no moment was it my intention to disobey the boss,” said Arrizabalaga. “It was misunderstood. I know if you see it from outside, it is not the best image. I have spoken with the boss. I think it was misunderstood. I understand that on television, on social media, they’re talking about this but it wasn’t my intention to go against the manager. We have spoken now, and I was only trying to say I’m fine. He thought I wasn’t fine. It was in tense moments, with a lot happening. I know the image it’s given, but I never intended to refuse to go off. It was only to say I was fine.”

Caballero saved three penalties while a City player in the 2016 final, against Liverpool, and helped Chelsea prevail in a shootout in the third round of the FA Cup against Norwich last season. “I know how good Willy Caballero is on penalties,” said the victorious captain, Vincent Kompany. “I didn’t want him to come on. It didn’t happen in the end.” City’s victory maintained the team’s pursuit of an unprecedented quadruple of major trophies, though Pep Guardiola bemoaned the loss of Fernandinho and Aymeric Laporte to muscle injuries which could keep them on the sidelines “for weeks”.

Sarri, whose future as head coach had been cast into serious doubt just seven months into a three-year contract by recent humiliating defeats, insisted he remains in control of his squad despite the Arrizabalaga incident and should remain in charge for Wednesday’s Premier League visit of Tottenham. “If you saw the match you can understand very well that, today, the players played exactly the match we prepared,” said the Italian. “So I think I am in control, fully in control of the situation.

“You have to ask the club [about the future], but I am really very happy because my feeling is that we are improving and could become a very solid team. We conceded nothing to Manchester City, the best team in Europe, and I saw the match on the pitch that I prepared.”