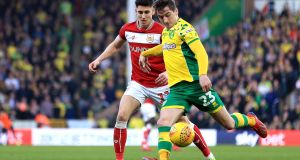 Norwich kept their lead at the top of the Championship table with a thrilling 3-2 win against in-form Bristol City.

Jamie Paterson put the visitors ahead at Carrow Road, firing across Tim Krul and into the far corner.

Norwich levelled after 36 minutes through Kenny McLean, but City were back in front straight from the kick-off as Callum O’Dowda dribbled through the Canaries’ defence before firing home.

And Daniel Farke’s side won it thanks to McLean’s stunning 25-yard strike midway through the second half.

Leeds moved up to second ahead of the late kick-off with a 2-1 win against Bolton at Elland Road.

The hosts took the lead from the penalty spot after 16 minutes. Tyler Roberts was upended by Pawel Olkowski and Patrick Bamford stepped up to put the hosts ahead.

But that lead lasted just six minutes. David Wheater’s header was cleared off the line but centre back partner Mark Beevers was on hand to bury from close range.

Ezgjan Alioski proved to be the match-winner, firing in from Mateusz Klich’s cross. Bolton boss Phil Parkinson was sent to the stands moments after the goal.

Middlesbrough maintained their automatic promotion hopes with a 2-0 win against QPR.

Jonny Howson fired Boro ahead in the opening minute, latching onto Muhamed Besic’s pass to fire low past Joe Lumley.

Ipswich’s Jonas Knudsen was given his marching orders after 25 minutes for pulling down Leon Clarke when through on goal.

But Ipswich rallied through Will Keane’s 33rd-minute penalty, only to see the three points snatched away after 90 minutes.

Semi Ajayi snatched a point for Rotherham in a 1-1 draw with fellow relegation strugglers Reading. Ovie Ejaria gave the hosts the lead just after the half hour with his first Reading goal.

The visitors were 3-0 up inside half an hour as Andrew Hughes, Tom Clarke and Ireland international Seán Maguire all found the net – with Paul Gallagher involved in setting up all three.

Millwall pulled a goal back after 67 minutes through substitute Ben Thompson.

Sheffield Wednesday kept up their unbeaten start under Steve Bruce with a resounding 3-1 win over Swansea.

Brentford came from behind to thrash Hull 5-1, meaning the Tigers have now won just one of their last six games.

Fraizer Campbell fired Hull ahead after 24 minutes, but Kamohelo Mokotjo, a hat-trick from striker Said Benrahma and Neal Maupay’s 19th league goal of the season secured an emphatic win.

Che Adams took his Championship tally to 21 goals as Birmingham drew 2-2 with Blackburn.

Adams opened the scoring before Charlie Mulgrew and Danny Graham looked like they had won it for Blackburn in the closing stages, only for Adams to strike again.

1 Six Nations: Ireland are contenders but England still the team to beat
2 In Donegal Michael Murphy is seen, simply, as a godsend
3 Nick Kyrgios sets up Rafael Nadal showdown after five-set thriller
4 Mike Catt hopes to have Irish backs purring in Six Nations
5 Owen Doyle: Creeping professionalism of schools rugby a threat to the game
Real news has value SUBSCRIBE