Mourinho holds his nerve as Tottenham edge closer to the prize 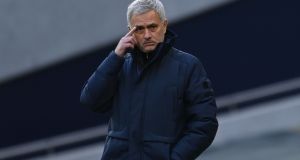 Never let it be said that José Mourinho hides his light under a bushel or runs from the pressure and significance of high-profile matches. The Tottenham manager goes hard in the opposite direction and, at times like these, as he prepares for a pivotal semi-final – at home to Brentford in the Carabao Cup on Tuesday night – it is easy to make out the trademark psychology.

Mourinho projects confidence, not least with references to his previous glories, and there have been more than a few of those in this competition alone. He is one of only three managers to have four League Cups to his name – three with Chelsea, one with Manchester United. The other two are Brian Clough and Sir Alex Ferguson.

Mourinho embraces the stakes, which for him and Spurs include ending a 13-year trophy drought; he was hired in large part to put this right. He can smell the possibility – just two games to achieve a success that would validate his appointment in November 2019 – and he wants his players to take their cue from him. He wants them to be similarly bold, to impose themselves on the occasion. This is the mentality that he is trying to instil.

“Is this my biggest game since arriving at Spurs? Yes, I think so,” Mourinho said. “In the perspective of the club chasing silverware for many years, I would say so. Of course, we always have important matches. At the end of last season we had a match at Crystal Palace that would give us participation in this season’s Europa League or not.

“The match against Leeds on Saturday was very important as we went a few games without a victory in the Premier League. But I would say a semi-final is always a very important match. The only one more important is a final.”

“Every competition is important,” Mourinho said. “That is my way of looking at things, especially at a club without silverware for more than one decade. After more than one decade, every competition becomes more important and if we win two matches, we win a trophy. Two difficult matches, of course, but if we win, we get a trophy which I think would be a very good thing for the club and for the players.

Mourinho takes Spurs to non-league Marine in the FA Cup third round on Sunday, and the expectation is that he will rotate his players for that tie. Against Brentford, he will be as strong as possible and he wants to build on the 3-0 win over Leeds. The result ended a run of four league games without a victory, and Mourinho was pleased to see his players go for the jugular at 1-0 rather than sit back and look to protect the advantage.

“I promise you this is what we want,” Mourinho said. “It depends on tactical conditions but, more important than that, it depends on mental and physical [conditions] and also the opponents. Against Leeds at 1-0, I felt the players really went for it.

“I saw Pierre-Emile Højbjerg and Harry Winks pressing much higher [in midfield]. I saw Højbjerg arriving in shooting positions. I saw the wingers feeling confident to interact more with the striker. The players had a good feeling as we finished the game always comfortable.”

Tottenham are reluctant to sanction a move for Dele Alli in January. The 24-year-old midfielder is frustrated at his lack of playing time and his representatives are exploring the possibility of finding a fresh challenge for him. He has been linked with a move to Paris Saint-Germain, and especially so following Mauricio Pochettino’s arrival there as manager. Spurs question whether there will be a market to sell Alli this month – in other words, if an interested club would pay a premium for a player who is battling to recover his top level – while they are not inclined to loan him for fear of reducing their options for the second half of the season.

Mourinho has lost one of his midfielders, Giovani Lo Celso, to a hamstring injury that stands to sideline him for most of the month, and the manager knows he will need to use all of his squad as the matches come thick and fast in four competitions.

With Lo Celso out, Mourinho started Alli in the Carabao Cup quarter-final win at Stoke on December 23rd, while it is understood that he had also named him in the team to face Fulham in the Premier League last Wednesday, only for the game to be postponed three hours before kick-off. It would have been Alli’s first league start since the opening weekend defeat against Everton and, annoyingly for him, Mourinho then selected Harry Winks over him for Saturday’s win against Leeds. Alli’s hopes of a move this month would appear to rest on the club signing a replacement midfielder on favourable terms; they could take back Christian Eriksen on loan from Internazionale but it would be a difficult deal to structure.

Mourinho has said that he does not expect to add to the squad this month as coronavirus impacts heavily on revenues and on the back of a surprisingly large transfer spend over the summer, although the club will be alive to opportunistic moves. Alli is under contract until June 2024.

“I’m not expecting, no,” Mourinho said last week of doing any transfer business in this window. “Times are not easy. The club made a big effort in the summer to try and build a good squad. Honestly, if something good happened to us, it would be a big surprise for me. I don’t feel the right to ask for something.”