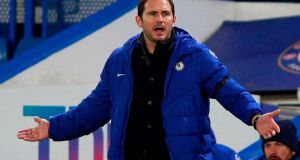 Frank Lampard is set to be given time to prove that he deserves to stay in his post as Chelsea’s manager despite growing alarm behind the scenes about performances and the club’s board being alerted to Thomas Tuchel’s interest in the job if it becomes available.

Chelsea’s faltering title challenge suffered another setback when they lost 3-1 at home to Manchester City on Sunday, putting Lampard in danger of being sacked before the end of his second season in charge.

Although the humiliating defeat to City is unlikely to result in the 42-year-old being dismissed, he is under mounting pressure and the hierarchy could be forced to act if they fear Champions League qualification is slipping from their grasp.

Tuchel, who led Paris Saint-Germain to the Champions League final last season before being fired by the French champions last month, has been put forward as a potential replacement.

The pressure on Lampard has grown following a run of four defeats in six games, leaving the board increasingly concerned about the team’s lack of progress this season. Roman Abramovich, the owner, gave Lampard £220m to spend on signings last summer, but Chelsea lie in eighth place after 17 games. They are seven points behind Liverpool in first place and, unless their form improves, face a fight to finish in the top four.

It is believed that Lampard, whose contract runs out in the summer of 2022, retains Chelsea’s backing for now. Conscious of his legendary status at Stamford Bridge, the club would prefer not to act hastily with their former midfielder.

Lampard fared well after replacing Maurizio Sarri in the summer of 2019, overcoming a transfer ban to qualify for the Champions League and reach the FA Cup final. He also earned plaudits for promoting Chelsea’s young players.

Chelsea are prepared to give Lampard an opportunity to reverse the slide, especially with the top half of the Premier League table so cramped. They are due to host Morecambe in the third round of the FA Cup on Sunday, though the tie could be postponed following a Covid-19 outbreak at the League Two club, before a trip to local rivals Fulham on Friday week offers a chance to return to winning ways in the league.

Yet expectations are higher this season. Although there is an acceptance that injuries to key players have made the task harder, Lampard’s inexperience has shown at times. He is in only his third season of management – he had a year with Derby County in the Championship before returning to Chelsea – and although he still enjoys support from the dressing room, his approach has privately been questioned by some players.

There is concern that Lampard is yet to hit upon his best starting 11 and has struggled to integrate Kai Havertz and Timo Werner following their big-money moves from the Bundesliga. Havertz, who has found it hard since testing positive for coronavirus in November, started on the bench against City, who led 3-0 at half-time, while eyebrows were raised at Lampard’s decision to start Werner instead of Olivier Giroud or Tammy Abraham at centre-forward.

Werner has gone 13 games without a goal and rarely troubled City’s defence, while Lampard’s use of Callum Hudson-Odoi was also called into question.

There was surprise when Christian Pulisic and Hakim Ziyech, who has just returned from a hamstring injury, started on the flanks instead of Hudson-Odoi, who had impressed in recent outings and scored Chelsea’s consolation after coming off the bench.

Chelsea’s approach was exposed by City and it is understood that some within the dressing room believe the team does not have a clear identity under Lampard, who ripped into his players in public after the St Steogen’s Day defeat to Arsenal.

However the lack of clear managerial alternatives could buy Lampard time. It is believed that Chelsea’s top choice was Mauricio Pochettino before the former Tottenham manager replaced Tuchel at PSG.

Tuchel boasts a stronger pedigree than Lampard and took PSG to the edge of European glory before losing the Champions League final to Bayern Munich last August. Yet while the German has a reputation for playing attacking football, he struggled to cope with the internal politics at PSG.

Julian Nagelsmann is another option, though the 32-year-old German is unlikely to want to leave RB Leipzig until the summer. Max Allegri, the former Juventus manager, is also out of work and has been linked with the job.

The picture will become clearer in the coming weeks. After facing Morecame and Fulham, Chelsea will want to see how Lampard fares in league games against Leicester, Burnley, Wolves and Tottenham. The first leg of Chelsea’s last 16 tie against Atletico Madrid in the Champions League next month could also be pivotal in deciding his future.

Dallas double sees 10-man Leeds shock Man City 14:52
Cork manager Ronan McCarthy fails to overturn 12-week suspension 11:15
Battle for Champions League: How do the contenders stand? 10:00
Lionel Messi is smiling again as Barça head into key El Clásico 10:00
‘What the film says is that you can hold on to your principles, and still emerge a winner’ 10:09