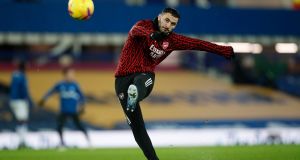 Mikel Arteta has revealed Arsenal’s priority in January is to trim the numbers in their squad. Sead Kolasinac is one of several players who have barely featured this season and the defender has joined Schalke on loan until the end of the campaign.

“We have a large squad and we knew that,” Arteta said. “A lot of things that should have happened in the summer, we cannot accomplish for different reasons. There are some players that are going to go on loan and going to leave and that is the priority at the moment. We cannot sustain the numbers that we have in certain positions and we are looking to do that, and then we will see if we have the right opportunity in the positions where we need some more help.”

Mesut Özil and Shkodran Mustafi are among others who do not feature in Arteta’s plans but one player the manager said he would like to keep is Reiss Nelson, whose absence from the squad in recent weeks fuelled speculation that he could be on the verge of a move.

“He has not been 100 per cent fit and that is the reason why he has been out and not featuring in the squad,” Arteta said. “He had a muscular issue. He has been in and out of training, but not been 100 per cent. It is a shame because I felt he was getting into his performance levels, he was starting to have some really good games and to build that momentum. This little injury has stepped him back a little bit, but this week has been much better.”

Arteta says he is confident that increased testing of Premier League players will help to ensure that the season can continue without interruption despite rising Covid-19 infection rates.

Arsenal’s next match is on Saturday against West Brom, whose manager, Sam Allardyce, called this week for a “circuit-breaker”. The latest round of testing returned the highest number of positives since the start of the season, with 18 of 1,479 players and staff found to have the virus. Two matches had to be postponed this week owing to high infection rates.

The Premier League has increased the frequency of testing from once to twice per week for clubs in Tier 4 areas, including Arsenal. Arteta says he believes that measure will help to tackle the rise.

“I think we are all concerned with our own health and with what is going on around us,” the manager said. “But all the protocols we have in place, everything we do around the training ground and around matches and the fact that we play our sport outdoors all minimise the risks a lot. If you see the record since we started to test, it is incredibly positive and as long as we can we have to carry on doing that but obviously without putting anyone at risk.

“I think we have shown the system is working. In the last week or so something has happened and we will have more restrictions and more tests to try to be as efficient as we were before and we will see, but I think it can work and we can carry on.”

Arteta said football had a crucial role to play in keeping people’s spirits up during lockdown. “The importance of football to this society is massive. When you ask around and talk to people and ask them what it means to have football in this difficult period for everybody when there is not so much to do, it is really, really important. What we have to do is try to do it in a safe way.”

Arteta also hailed the influence of Bukayo Saka, the 19-year-old who has come to the fore at a time when more established players have crumpled under pressure. “He’s a great example for any young player: to play with that commitment, that passion and also that courage.” – Guardian