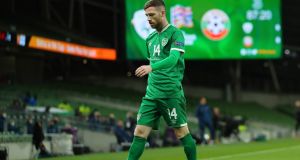 Jack Byrne’s move to Mick McCarthy-managed Apoel in Cyprus has been confirmed by the club which has said the Dubliner has signed a contract until May 2023 and will wear the same shirt number, 29, that he did during his time at Shamrock Rovers.

Byrne had been linked with the club since shortly after McCarthy took over at the start of November and had confirmed last week that he would not be staying at Rovers. That news came after he played an instrumental part in the Dublin club’s title success and pretty much cornered the market in the league’s individual awards for the 2020 season.

The move has the potential to be a really good one for the 24-year-old with the money on offer in the Cypriot league ensuring that standards are a significant step up on Ireland and Apoel, who were reported a couple of years back to have a budget of €13 million (around six times that of the biggest Irish sides) have made the group stages of one or other European club competition in five of the nine seasons since going all the way to the quarter-finals of the Champions League back in 2011/12.

Technically, they are the most recent champions of Cyprus after winning their seventh straight title in 2019, while the league was abandoned last year with the Nicosia-based outfit in third place. However, they are struggling badly this year, a situation that has not greatly improved since McCarthy took over two months ago.

The twice Republic of Ireland manager, who handed Byrne his senior international debut during his second stint in charge, did have an immediate effect with the side winning three and drawing one of their next five league games but their form has declined again since with three straight defeats to nil, two of them to clubs below Apoel in the table. They are now eight points adrift of sixth place and the championship playoffs and only four clear of automatic relegation with 11 games to play before the top flight splits.

There is something of a financial crisis off the field and the club’s board has called a meeting of shareholders in recent days to discuss the situation. The issues may well have made Byrne, who was out of contract at Rovers and on very modest wages by Apoel’s standards, all the more attractive a proposition but McCarthy clearly sees the Irishman as having the potential to make an impact at this level and the player should get the opportunity to add weight to his case for more of a role with the senior international side.