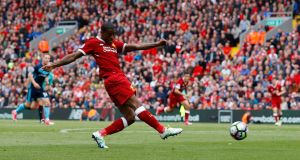 Georginio Wijnaldum’s goal on the stroke of half time helped Liverpool past Middlesbrough at Anfield. Photograph: Phil Noble/Reuters

For once, Jürgen Klopp appeared not to mind the Kop revelling in victory long before the final whistle. There were nerves and there were difficulties against Middlesbrough but ultimately there were also three valuable points as Liverpool sealed a top-four finish and a ticket to the Champions League at Anfield. Klopp basked in a fitting reward from his first full season as Liverpool manager.

Three goals in eleven minutes either side of half-time gave Liverpool the victory required to guarantee a place in the Champions League, one that will be determined by a play-off in August after Manchester City finished third. Georginio Wijnaldum, Philippe Coutinho and Adam Lallana secured the win against Steve Agnew’s relegated side, who posed Dejan Lovren and Liverpool’s defenders problems in the first half before being swatted aside.

Klopp had claimed he would not have settled for a final day play-off for Champions League qualification at the beginning of the season as he dreams of “the biggest things” but this has been a season of tangible progress. Liverpool had spent only two weeks outside the top four since September and rediscovered their clinical touch at home just when it was required.

Wijnaldum’s sixth league goal of the season released a tension that had been rising throughout the first half in the stands and had begun to effect Liverpool’s performance on the pitch. Klopp’s team dominated possession from the start, forcing Middlesbrough’s formation to morph into a 6-3-1 and a test of Liverpool’s patience against another deep defence, in which Ben Gibson again impressed. But a lack of composure on the ball and penetration generated audible and increasing groans around Anfield until one strike in first-half stoppage time changed the atmosphere and the context of Liverpool’s campaign completely.

Liverpool, with Coutinho dictating proceedings back in central midfield, should have started an ultimately comfortable passage into the Champions League with their first meaningful attack. James Milner’s cross fell to Nathaniel Clyne of all people and, although the two full-backs’ adventure underlined Klopp’s intent, the defender dragged an inviting chance horribly wide. Emre Can, Coutinho and Daniel Sturridge all went close before, with the home performance deteriorating, one moment of quality changed everything.

A perfectly weighted flick from Roberto Firmino sent Wijnaldum sprinting between Gibson and George Friend into the penalty area. The Dutch international, who instigated the move, opted for power and beat Brad Guzan at his near post with a blistering finish into the Kop goal. Liverpool regained fourth place from Arsenal with the midfielder’s fine finish and Champions League qualification was never in doubt thereafter.

It could, arguably should, have been a more complicated equation for Klopp’s team, however. Dejan Lovren endured a nerve-stricken afternoon and appeared to have conceded a penalty and invited a red card when he tangled with Patrick Bamford in the 22nd minute. Bamford was clean through on goal after exchanging passes with Adam Forshaw when he went to ground under pressure from Lovren. The Liverpool defender’s arm did make contact but referee Martin Atkinson, perhaps swayed by the ease with which Bamford collapsed, waved play on. The Middlesbrough bench were incandescent at Liverpool’s reprieve.

After the high anxiety of the first half, the second was a procession into the Champions League for Liverpool. Coutinho swept a trademark free-kick over the Boro wall and beyond an unconvincing Guzan dive into the bottom corner within six minutes of the restart. Shortly afterwards, on a counter-attack from a Middlesbrough corner, Adam Lallana made it three with a comfortable finish. Lallana led the break but his attempted cross for Sturridge was intercepted by Fabio Da Silva. Wijnaldum and Sturridge regained possession to play the midfielder in behind the visiting defence and he tucked the ball into the bottom corner with ease. Job done.