Soccer Angles: Leicester’s fall almost as surreal as their rise 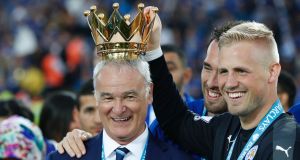 Claudio Ranieri was sacked in February less than a year after leading Leicester City to an unlikely Premier League title. ‘The majority of Leicester fans backed the decision.’ Photograph: Adrian Dennis/AFP/Getty Images

Let’s talk of graves, of worms, and epitaphs.

Now the end is near, we can say it would have been better had Shakespeare given this line to Richard III, better at least from a Leicester City perspective.

This time last year we had feasted on King Richard and Leicester, the name of the stadium being King Power and even one of their players being called Andy King. Then there was the middle name of Jamie Vardy, which turned out to be Richard.

The king unearthed from a car park, the champions unearthed from battles of relegation. It all just came together, surprisingly, happily, successfully. Dilly-ding, dilly-dong. Leicester City were the 5,000-1 Kings of England.

But Leicester City did not defend their title like kings. They let it go, released the crown too easily, too quickly, and while some said this was predictable, it was not inevitable. Now there is one last weekend as champions, even if the reign is over, Tottenham have just banged in six nails and Leicester have slipped back to the margins.

The situation deteriorated, convulsed into regicide. Claudio Ranieri, the king of 2016, became Claudio the deposed of 2017. And the man who replaced him, and who may have been one of the authors of Ranieri’s downfall, is called Shakespeare.

There was tumult, a very different kind of drama from the week-by-week shock of bliss last season.

And now these two seasons of astonishment have reached a lull: Leicester have one more game in their champion season, at home to Bournemouth on Sunday, a match they neither need to worry about winning, nor fret about losing.

The squad can say a tranquil farewell and thanks and from a position of relaxed safety that fans would have bitten limbs off for two years ago.

So there will be a curious mixture of emotions. Whereas last year there was outright euphoria when Everton became the final visitors – and lost – Sunday will bring reflection amid restrained applause. But the nation’s attention will be elsewhere.

This time last May, club and town were centre stage and David Bevan, a Foxes fanatic, was finishing The Unbelievables: The Remarkable Rise of Leicester City.

It was one of at least three books published about an unforgettable time. The Unbelievables has a lovely story from before that last home game against Everton of three fans dressed as slices of pizza. Then Andrea Bocelli sang Nessun Dorma and Wes Morgan lifted the trophy.

These were surreal sights to Leicester supporters conditioned to seeing much less, and “surreal” was one of Bevan’s words for last season. But he also applies it to this.

“It’s been quite strange,” he says. “After last season I wanted to celebrate us being champions of England, but for quite a lot of the season it looked as if we might be relegated. In the winter we lost at Sunderland and Southampton and when we lost at Swansea in February they went above us. We were going to places expecting to lose. And we did.”

At the same time Bevan and other fans were also going to Bruges, Copenhagen, Oporto, Seville and Madrid. “Bruges is probably the one I’ll remember most,” Bevan says. It was the first time, and Leicester won.

But then he recalls Swansea. Defeat there was a fifth consecutive Premier League loss and by the next league game, at home to Liverpool, Ranieri was gone. There was wailing. Leicester won 3-1.

“The majority of Leicester fans backed the decision,” Bevan says of what Gary Neville’s described as “the most distasteful moment of the season” – Ranieri’s sacking.

“We knew about last season’s national and international popularity but it wasn’t just a fairytale to us, beneath it there’s a football club. No-one wanted to hound Ranieri out and I can’t say the crowd ever really turned on him, but the owners have been proven right.”

In the beginning – and the first game of the season was lost at Hull, a club in turmoil – some of the explanations offered were joyous. There was the Champions League, new players such as Ahmed Musa and Islam Slimani, bought for a total nudging €80m, the fresh pressure of being champions. These were distractions, but it was felt they were creases, not ruptures.

Then, however, other explanations were required – such as why three consecutive away league games at Liverpool, Manchester United and Chelsea saw11 goals hit the Leicester net. “Fearless” had become Leicester’s motto, now some at the club grew fearful.

N’Golo Kante had gone. One of those who personified Leicester’s rise with his ego-free energy and enthusiasm, Kante was plucked by Chelsea, who, ultimately, also took their title. Kante left a big hole and his intended replacement, Nampalys Mendy, fell into it. He was not alone.

Riyad Mahrez, underestimated last season, was now cornered by markers. His contribution was confined and that alone was enough to alter the shape of the team’s attacking. It had a knock-on effect on Vardy, who had only scored five by the end of February.

Then there was the ageing defence, unprotected by the missing Kante. The flow of last season had been interrupted. And Ranieri, recently praised for not tinkering, “didn’t react quickly enough”, according to Bevan.

So change was forced through. Everybody felt for the Italian, but there was a discrepancy between the national consternation and supporters’ understanding. A rush of six straight victories extracted some of the angst and meant Craig Shakespeare steadily ate into the perception of him as the Brutus figure in this power game.

Suddenly the team was compact and energetic again, like Pearson’s team, says Bevan: “It’s like the Great Escape season team.”

The fans have taken to Wilfred Ndidi, 20 years old and one for the future. There is recognition that Mahrez will depart, possibly Kasper Schmeichel too. The centre of defence will be replaced. Change is coming. There may be a new manager. Already fans are considering the possibilities of next season, without European football.

A match against Bournemouth does not quite amount to the end of an era, but if Mahrez and Schmeichel follow Kante out, and Ranieri, who followed Pearson out, then this could mark the end of a cycle that, for one glorious season, made Leicester City the kings of England.