Manchester City sign off with romp past pitiful Watford 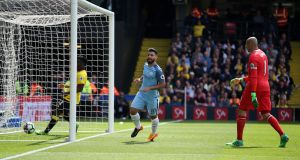 Manchester City secured their place in the Champions League with a brutal dismissal of Watford, who closed out Walter Mazzarri’s unhappy tenure with a spectacular collapse in front of their furious supporters. After enduring the first trophyless season of his managerial career, at least Pep Guardiola has something to show from his debut campaign in English football. City will expect more next year, but this will do for now.

It seemed that City might win the title at a canter after the Guardiola era opened with six consecutive triumphs in the league, but that start turned out to be a deception once the first cracks in this hugely gifted but damagingly flawed team appeared and momentum slipped away. Too inconsistent to maintain a convincing pursuit of Chelsea, City have underachieved in a manner that their owners cannot have envisaged when they tempted the most coveted coach in Europe to Manchester and it felt deeply unsatisfactory that a club of their financial means arrived at Vicarage Road still unsure of their place in the top four.

Yet on an agreeably warm afternoon in Hertfordshire, there was never any danger of nerves causing City to freeze. They could not have asked more obliging hosts than Watford, who lined up with a midfielder in central defence, a callow teenager at left-back and two goalkeepers on the bench. If this was Mazzarri’s attempt to make his bosses rethink their decision not give him a new contract, it backfired badly. This was no farewell party. Watford’s players hardly broke sweat, creating the impression that they could not wait to see the back of Mazzarri, who did little to endear himself to the home fans by naming Troy Deeney amongst the substitutes.

Watford’s huddle moments before kick-off fooled nobody. Perhaps they were discussing their holiday plans. It was a disingenuous attempt to prove their commitment to the cause and it looked utterly ridiculous once the game began.

City simply let their sublime football do the talking. Less than a minute had been played when Heurelho Gomes summed up Watford’s atrociousness by dithering with the ball at his feet, allowing Aguero to dispossess the goalkeeper and cross for Gabriel Jesus, who saw his header bundled off the line by Jose Holebas.

Watford bravely held out for another three minutes. Kevin de Bruyne swung in a corner from the right and Vincent Kompany, granted the freedom of the penalty area, thumped a header to Gomes’s right. The marking was utterly pathetic.

City created enough chances to win several games in the first 20 minutes. Valon Behrami was hopelessly out of depth alongside Holebas in defence and Brandon Mason, making his first league start, was powerless to stop Jesus on the left. M’Baye Niang’s inability to track back hardly helped the 19-year-old left-back, whose frailties were horribly exposed when Fernandinho charged past him on the way to scoring City’s fourth goal shortly before half-time.

It had already turned into an ordeal for Watford by then. Their response to falling behind was utterly feeble. They offered no resistance whatsoever, enjoying escapes when Behrami and Gomes took it turns to deny Aguero, and De Bruyne had an embarrassing amount of space to glide into when he turned away from Aboulaye Doucoure in the 23rd minute.

Any lingering competitive spirit drained away from Watford. They had no interest in preserving their dignity. Their shameful inability to carry out the basics shamed them and demonstrated why Mazzarri is leaving. Letting David Silva do as he pleases is never a good idea and the Spaniard sparked the move that led to City’s third goal. His pass released Leroy Sane, who tore away from Daryl Janmaat before squaring unselfishly squaring for Aguero to score his second.

Aguero had chances to complete his hat-trick, only for Gomes to tip one fierce effort over and another wide, but the Argentinian did play a pivotal role in City’s fifth. Watford had briefly raised their level after half-time, with Stefano Okaka forcing Willy Caballero to make his only save with a powerful drive from the left and Niang shooting wide from a tight angle, yet City soon quelled any suggestions of an unlikely uprising. Aguero burst past Mason on the right and his chip found Jesus, who controlled expertly before scooping the ball over Gomes.