Michael Walker: World from which Colin Bell emerged is all but gone

Mining, coal, part of the north-east of England’s raison d’etre, has gone 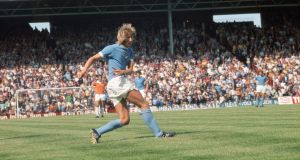 By the look of the map, it seems Hart Street has gone. It has been demolished and replaced by Hart Crescent and a series of other streets in a small estate by the sea. There’s Attlee Avenue and Bevin Grove, too, reminders of who used to be and how it used to be.

This is Blackhall Rocks on the northern edge of Hartlepool on England’s once black north-east coast. For the first years of his life, Hart Street is where Colin Bell lived and played.

The sand and sea here were black because of coal and Bell was born nearby because of coal. His father John was a miner who worked underground at Blackhall Colliery.

John Bell had first gone down the pit aged 12. In 1946, when his son Colin was born two miles away in Hesleden, 1900 men worked below ground at Blackhall and another 500 on the surface. Blackhall was where Bob Paisley was an apprentice bricklayer.

Mining was hard and dangerous. But it gave Blackhall employment, industry, purpose. It also brought a social structure and a culture in which sport (fresh air, above ground) was essential. Football and cricket, then more football. Colin Bell was raised in this culture and to an extent was raised by this culture.

It may be overly impressionistic, but the news on Tuesday of Bell’s death felt symbolic of more than the loss of one individual, however painful; it was a marker of a greater change. Industrial change, societal change. Mining, coal, part of the north-east of England’s raison d’etre, has gone. You need to be around 50 to fully appreciate Bob Paisley, or Bell for that matter. Who names streets after Ernest Bevin these days? This was old England. And it’s over.

Today when outsiders think of Hartlepool, they think of Brexit and the shock of Brexit. They had not paid attention to its long run-up.

Colin Bell left his native area decades ago but his death had the resonance of a perhaps deeper, modern disconnection. You go back to Hart Street, back to his roots and what he said about them and realise a footballer who was once called the future is more than his career - in a way he represents a gone way of life, of being.

It was similar with Tommy Docherty. When Docherty died last week, the material poverty of his Glaswegian upbringing was revisited, understandably. So too was the fact Docherty’s father died when Tommy was nine years old. What a destabilising effect that must have had.

Nor can the details of Bell’s early life be skimmed over. Bell’s mother Elizabeth died not long after his first birthday, back when cancer was not called cancer. Unaware, he was brought up by his aunt and his sister Eileen and he was not told all this until later. So his aunt was ‘Mum’.

John Bell was a decent amateur footballer and so was Elizabeth. As Colin recalled: “She played during the 1926 General Strike to help raise funds for the poorer people in the village.”

One imagines that of those who appeared in the England-Brazil game at the 1970 World Cup, not too many would be referencing the General Strike. Even to Bell it must have seemed like grey history compared to the multicolour present. Then again, Bobby Charlton, whom Bell replaced against Brazil, was born in 1937 into a family of north-east miners.

As with Charlton, Bell inherited football genes and grew up in a football culture. Historically, Co. Durham provided more England footballers than anywhere else and at 11 Bell was playing for Co. Durham’s under-15s. In the team photograph, Bell is strikingly smaller. That’s how good he was.

Not that Bell would call himself the King or anything like it. He was known among his peers for reticence. The clubs who pursued him most enthusiastically as a teenager were Arsenal, Wolves and Huddersfield Town. Bell joined Bury because he felt more comfortable there. “Homely”, was his description. Bury made him captain at 19, but it was based on his ability rather than his personality.

Bell understood the scale of his talent, how could he not? In a book published in 1970 it was written: “Colin Bell symbolises soccer in the seventies. He is the ultimate in the all-purpose footballer.” In the past few days there has been a comparison with Kevin de Bruyne and it is not overblown. Before 1968, Manchester City had won the league title once in their then 88-year history. But they won it with Bell. They also won the FA Cup, the European Cup Winners’ Cup and the League Cup.

At Maine Road and the new City stadium only one player has ever had a stand named after him and that is Colin Bell. So City understood. England did as well. Bell was first capped at 23 and won 47 more. He was the next Bobby Charlton.

But there is a difference between knowing and showing. There are plenty of comments today about false modesty, as if that is its only form. Bell, like Paisley, offered genuine modesty. It is another thing that has dwindled. Ian Herbert’s book about Paisley is called Quiet Genius; when Bell finally committed to an autobiography - in 2005, 36 years after his last City appearance - it was called Reluctant Hero.

Restraint, said the poet, is a sign of the deepest feeling. Bell thought his may have stemmed from his different childhood. He loved the game, but not the fame. He would sometimes deny who he was to children pointing at him in the street. While others called him Nijinksy, Bell’s response was: “I’ve never wanted to be a celebrity.”

He would return now and again to Hesleden and Blackhall and to Horden Colliery Welfare’s ground where he used to play. His favourite film was Billy Elliot. Bell could see himself in it.

We will not see his like again. Because the world from which Colin Bell emerged is all but gone. Blackhall Colliery closed in 1981. Horden CW has all but gone. Hart Street as well, Bury FC, Maine Road, old Manchester City. Now Bell himself.

It’s said when a person of a certain age and life experience dies, it’s like a library burning down. At least the reluctant hero left us one book, so we can try to understand.