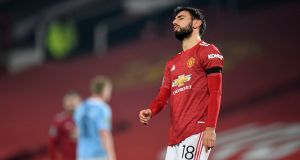 Wednesday evening and we were all faced with a tricky live viewing choice: the attempted coup in Washington or the second of the Carabao Cup semi-finals. After some consideration, it was actually a straightforward enough decision, the opportunity to watch potential history in the making proving too hard to resist. Never before, after all, had Manchester United won a cup semi-final under Ole Gunnar Solskjaer. There’ll be other attempted coups.

Still, though, if we were banking on 2021 being a bit more normal, well…. and it’s only a week old. The hatches may need to be battened down for the next fifty-one.

Any how, it didn’t seem that Roy Keane was all that exhilarated about being at Old Trafford, maybe wishing he was at home watching CNN. He was, in fairness, almost excited about the prospect of watching a Manchester derby, it was just the competition the teams were playing in that didn’t seem to leave him tingling.

It was, though, as Laura Woods pointed out, a chance for United to win their first trophy with Solskjaer at the helm, so it was actually quite a big deal, yes? “You need to start somewhere, I suppose,” he shrugged, him being a man who succeeded in winning just about everything in the course of his career, except a Rumbelows/Coca-Cola/Worthington/Carling Cup - and is probably quite proud of none of them appearing on his personal roll of honour.

(Feel free to use that in your next pub quiz, if the pubs ever open again).

Team news and Ole had brought Victor Lindelof back in to the team, which led to some mean folk concluding that this meant he wanted his team’s Carabao Cup run to end so they could concentrate on the league. They are, after all, level on points at the top with Liverpool. If you’d asked Santa for that as a pressie, he’d have most likely said, ‘love ya kid, but even I don’t believe in miracles’.

Paul Pogba was in again, though, Micah Richards especially chuffed, him being a big fan. “He just needs love and care,” he said, Gary Neville, anticipating a Roy meltdown, heading for the nearest available bunker.

But Micah lived to tell the tale, him and Roy sort of the Jack Lemmon and Walter Matthau of our time, the oddest punditry couple on the telly box.

And come half-time they were in rare agreement, reckoning that was more than a half decent 45 minutes. “A proper game of football,” Roy purred, one that featured three goals ruled out by VAR in the first 23 and a half minutes. And you don’t get much more exciting than that.

But by the time John Stones scored his first goal in just the three years, you’d have been wondering if it was time to switch back to CNN to check on how the coup was going, the prospect of Ole making semi-final-winning history seeming more remote.

Indeed, Ole grew so desperate, he even threw on poor old Donny van de Beek, a player he bought during the summer but can’t remember why. By then, though, Fernandinho had made it 2-0, allowing United to concentrate on the league.

Micah was buzzing, Roy a little deflated, even if it was only the Carabao Cup, his most damning assessment of United that he didn’t want to be too hard on them because he reckoned they’d played quite well but that wasn’t even close enough to matching Pep’s party poopers. That’s like your Da telling you he’s not angry with you, just disappointed.

Back on CNN and if John King had been on number-crunching duty he might well have pointed out that, amid all the gloom and doom, United can at least point out that they finished joint third in the 2021 Carabao Cup. Although, true, he’d have a job persuading Roy that that’s worth adding to the roll of honour.