Manchester City give Chelsea and Lampard a lesson 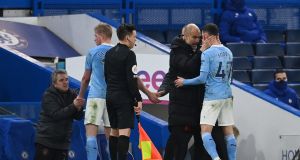 With 43 minutes gone at Stamford Bridge, Phil Foden could be seen gliding through the debris, the ruined city walls of Chelsea’s right flank.

There were two sky blue shirts waiting inside him for an invite to score. Foden skimmed the ball inside to Ilkay Gundogan, who chose that moment to perform a reverse pirouette, mid-air heel-dink that pinged just past the post.

In that moment the game seemed to sag a little, to lose its clear edges. Manchester City were 3-0 up at the time. They were breezing along, exhilarated by their own movement. This was different though. This was a Premier League team having fun. Actual fun. That’s going to hurt.

Foden had already scored City’s second goal, made by another surge down the left followed by two moments of brilliance. First Foden did something unusually clever, leaping back onside as Kevin De Bruyne’s initial pass broke back to him.

De Bruyne then produced a moment of cruelty by waiting, waiting some more, then slipping the decisive pass through Cesar Azpilicueta’s legs. Foden scored with a pinged first-touch, the ball making a lovely crisp clang as it hit the pole in the corner of the net.

Either side of which City were exhilarating. They scored three goals in 16 minutes. They left Chelsea’s full-backs wheeling around in confusion. They romped and pranced. They had fun. And at times this looked like a real-time experiment: what happens when a long-term sporting project, with the same ideas, the same fully-loaded plan at every level, meets a punt on talent and celebrity.

Two things happened here. The key point, before wheeling out the great creaking finger of blame, is that City were wonderful, a fully-networked team speaking to itself in some internalised high-speed code.

This looked like a Pep-tribute XI before kick-off as City lined up with six midfielders and one converted full-back. This was something different though, evidence of Guardiola’s own changes this season. City took the minor share of possession. But they still had 11 shots on goal in the first half alone, and at times seemed to toy with their opponents.

Foden embodied this clarity of purpose. In the first half he touched the ball 18 times, but scored one, made one and romped up and down the left like a Labrador puppy. At half-time Guardiola could be seen babbling in Foden’s ear as he walked off, spitting out tips, instructions, praise. This was showboat-coaching, the managerial equivalent of flicking the ball up on your knee before you volley it into an open goal. We get it, Pep. You can do this stuff.

The second thing that happened was Chelsea just fell away. City pressed and found no resistance. Oh, Frank. Before this fixture Olivier Giroud had suggested Frank Lampard had been working on “every tactical part” of City’s game. This, Giroud suggested, was a special project for Lampard, a chance to peer over the tactical pince-nez and lock brain-horns with the don of modern keep-ball.

In the event Lampard sent out his glitziest forward line, a high grade Werner-Ziyech-Pulisic trident, albeit one with six goals in a combined 41 league games this season.

The idea seemed to be that Chelsea would break quickly and take advantage of spaces on the flanks. Guess what? The exact opposite happened. City broke into Chelsea’s spaces, and twanged the holes in Chelsea’s own flanks.

Lampard will perhaps be tempted to blame the “character” of his players once again. He might be better served taking his lessons. Defeats are also useful. They water the ground.

Was it a good idea to conjure an alternate front three that has barely played together yet, and with little success when it has? Why would you ask Azpilicueta to play as an exposed, half-speed right-back against the great over-loaders? Why not respond once it becomes clear your team is struggling to deal with three inside forwards and no No 9?

There were five high-priced Lampard-era starters in this team. The entire structure lacked intensity, their weak spots vulnerable to City’s strengths. There was no adjustment as the light blue shirts began to twirl and dance through the lines.

City’s third goal felt like the most painful moment for the pre-game Lampard tactical study group. De Bruyne headed a loose ball to Raheem Sterling and suddenly Sterling was off, Demba Ba-ing his way into vast open empty acres of green space. Where, you wondered, had the entire Chelsea team gone as De Bruyne ended up spanking the ball into the net.

All things being equal, Lampard is now in the blue zone for Chelsea managers, that phase where a profit and loss equation is applied to points and progress and money spent. If his name was Big Phil Scolari or Carlo Ancelotti he might be in trouble. For Chelsea and their manager this was a lesson. Will they find the time, and indeed the will, to take it on? – Guardian