Public sale tickets for Aviva playoff match all sold out 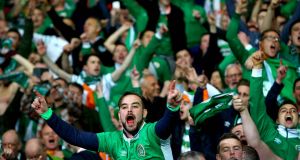 Republic of Ireland fans have snapped up tickets on public sale for the home playoff against Denmark. Photograph: Ryan Byrne/Inpho

Tickets for Ireland’s second leg World Cup playoff match against Denmark at the Aviva stadium - which went on public sale on Friday - are now all sold out.

The public sale began at 11am on Ticketmaster with just a limited number of tickets available. Only premium level seats were available, at a price of €120, and they were all snapped up in less than five minutes.

All the other home support tickets tickets for the encounter (on Tuesday, November 14th) had already sold out during the pre-sale period for season ticket holders, Club Ireland members, Jack Charlton Lounge patrons and Three customers. All those tickets were sold out in seven minutes. Should more tickets become available through Denmark not taking up their full allocation, they will also go on public sale.

Meanwhile, the FAI remains in negotiations with the Danish FA in the hope of increasing the Irish allocation for the first leg in Copenhagen (Saturday, November 11th) to 3,800 (10 per cent), in return for a 10 per cent allocation for Danish fans travelling to Dublin.

The current allocation of five per cent – set by Fifa – would provide 1,900 tickets for Irish fans, but many more are expected to make the trip to the Danish capital.

Applications for first leg tickets must be submitted via http://away.fai.ie before Monday, October 23rd at 5pm.

Ireland were drawn to play Denmark on Tuesday evening, after both countries finished second in their respective qualifying groups. The team which emerges from the two-legged playoff will qualify for the World Cup in Russia next summer.