Keith Duggan: How we could all do with a dose of that Italia 90 feeling just now 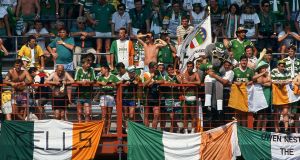 Irish fans in the stands of the Stadio Luigi Ferraris in Genoa for the World Cup round of 16 game against Romania in 1990. Photograph: Billy Stickland/Inpho

This summer will go down as the strangest that Ireland has ever experienced- except for those hallucinogenic few weeks that were Italia 90. Thirty years ago, the weekend section of The Irish Times had on its front page headline one burning question: Is this a dream? This weekend, that question remains relevant to all our lives.

On the last Saturday of June 1990, Ireland played Italy in the splendour of Rome’s Olympic stadium in the quarter-final of the World Cup. Nessun Dorma and all that. And it felt like a dream. Ireland had the tingles: the country couldn’t quite get over itself. This summer also feels like a dream – albeit one you might have if you accidentally swallowed a few horse tranquilisers. Conversations that would have seemed genuinely unhinged just four months ago – no travelling abroad, sitting two metres apart in pubs, face masks – have become unremarkable.

When sport stopped with the lockdown, it led to an intense period of retrospection and time to mark old significant anniversaries. The 30 years since the delirium of 1990 is easily the most vivid of these. And a significant chunk of lifetime has unbelievably and quickly slipped past since the urgent magic and tension and, let’s be honest, mass drunkenness of those weeks. Even so, trying to pinpoint what happened in Ireland through the adventures of their football team in Italy remains curiously elusive.

Thirty years ago yesterday, Ireland knocked Romania out of the World Cup through Packie Bonner’s save and David O’Leary’s exultant penalty. Just before that kick, you could have heard a pin drop in Ireland because everyone was indoors watching the game. Within minutes, the country gave in to some kind of locked-in freedom of expression. That day was Ireland’s Walt Whitman moment.

‘The city suddenly changed in sound: first the shouts, then a car horn, then a siren, then the honking of a bus,” wrote Kate Holmquist who was in the city centre, “and within minutes thousands of cars were converging on the city centre, all blasting their horns and flashing their lights, completely drowning out the motorcycle escorts which accompanied the speeding black Mercedes of Euro ministers on their way from Dublin castle.”

Fans climbed onto the plinth of the Daniel O’Connell statue and wrapped Irish scarves around the big guy’s emancipatory neck. They jumped into the Anna Livia fountain. People said they’d never see this happening in Dublin before. And this sense of not-giving-a fiddlers, of breaking out, was happening in every town in Ireland at the same time.

It was and wasn’t about a football match. But it was definitely about presence. The summer gods from Brazil and the Dutch were gone by the quarter finals. The Belgians and the Scots were gone home. But here was Ireland. Small, edge of Europe, damp, irrelevant-except-on-Eurovision weekends, taking centre stage against the sleek beautiful Italians. But what did it mean?

And why did it happen? You could search a hundred different places for answers but a recent conversation between John Giles, Liam Brady and Eamon Dunphy on the latter’s podcast The Stand offers maybe the closest reading. The programme was dedicated to talking about Jack Charlton on his 85th birthday.

And it is impossible to think of Italia 90 without seeing the silhouette of the quintessential product of Northumberland, dragged from the fishing spots, wind chapped and hawk-eyed. Giles played with Charlton for a decade at Leeds. Brady played against him at club level and then for him with Ireland. Dunphy knew him, liked him and became a public thorn in his side. They paint a picture of a contrary, odd, funny, opinionated and completely intractable man.

“Jack didn’t care about anybody. He didn’t listen to anybody. But he gave leadership,” Giles says in what may be the key point. At Leeds, Charlton would forever berate Giles and Billy Bremner –“those little shits” – for coming too deep to collect the ball from him. He wanted it rid of it, not to pass it out.

As a coach, he was a disciple of the Charles Hughes school of coaching at the FA, whose basic theory was to get the ball forward as directly as possible, get it into the box and create chaos and opportunity. He didn’t trust cerebral, on the ground football because he himself was not that kind of player.

All of this would matter hugely when he became Ireland manager. And it’s forgotten that the FAI selection process for the manager’s was meant to go another way. Giles was shabbily treated in that episode, enticed to put his name forward as a candidate along with Liam Tuohy, Charlton and the Liverpool legend Bob Paisley – who was considered a shoo-in for the post and who had 10 votes after the first round of voting . . . technically, he had the job. But another round was held anyway.

The chicanery behind Charlton’s selection adds to the sense of a kind of unique aligning of the stars. Charlton was lucky to inherit a squad of Irish players of the first rank. He was bullet-proof in his sense of mission and terrible with names, referring to Brady as ‘Ian’ in his first team selection. “Jack, I’m delighted to be playing,” said Chippy Brady, late of Arsenal, Juventus and Sampdoria. “But Ian Brady is the name of the Moors murderer.”

Charlton had a blunt defiance for niceties and authority which appealed to the Irish. He could be funny and gruffly charming. He was English and he claimed to love the Irish. That mattered. He had won the bloody World Cup! He liked a smoke, a drink, fishing and cards. And his teams were fearless and got results. When Ireland beat Romania, in the heat and emotion, Big Jack said that it was better than winning in Wembley in 1966. Maybe he knew that’s what the Irish wanted to hear in the year 1990. Maybe he meant it. At the time, it seemed plausible. Because what, in Ireland, had ever been better than this?

As a football team, Charlton’s Ireland were functional and organised. “When we didn’t have the ball we were the best team in the world,” Giles says of the relentless harrying and pressing for which Charlton’s teams became notorious. If he had only trusted Ireland’s footballers a bit more, then who knows? But that was the thing: Charlton didn’t trust footballers full stop.

It meant two things were happening that summer: there were, as Dunphy says “football people making football judgments” on Ireland in Italia 90 and there was this national euphoria at the sight of a losing, underwhelming Irish entity – the national soccer team – now marching into the head space of the old, aristocratic nations of Europe.

The line of critical thought on which Dunphy bravely embarked was borne of the anxiety and eagerness of a football kid desperate to see the team he loved express itself on the big stage: let’s show the world that Ireland can play this game. But most people just wanted the narcotic thrill of winning and going higher, higher.

The thought of actually beating Italy and making it to the semi-final was really never spoken about. There may have been a private collective recognition this weekend 30 years ago that just to be in Rome against Italy was the summit of how far we could dream. So it went. Schillaci, a night game wreathed in sweat and tension, an honourable defeat, a homecoming like no other. “I missed Italia 90,” quipped Con. “I was at the World Cup.”

The year kept ticking. Nelson Mandela came to Dublin, Mary Robinson was elected president, John McGahern’s Amongst Women was published. The pace quickened through the last decade of the sprawling, haunted 20th century when Ireland staggered to its feet as a nation. A bit surer in step, maybe, after those strange and blissful few weeks when Ireland celebrated itself like never before.