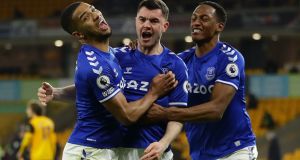 Michael Keane headed his third league goal of the season as Everton overcame problems with their strike force to claim a win that lifts them into the top four. Alex Iwobi shot the visitors into an early lead before Rúben Neves drew Wolves level in a contest in which the home side’s absences ultimately proved the more costly.

Injuries forced both managers to get inventive. With Dominic Calvert-Lewin missing because of thigh trouble and Richarlison judged to be fit enough only for a place on the bench, Carlo Ancelotti decided to start without a specialist striker. Gylfi Sigurdsson and James Rodríguez served as a pair of false nines while Cenk Tosun was left among the substitutes despite scoring his first club goal of the season in last weekend’s narrow FA Cup win over Rotherham.

Fears about Everton’s potency were banished after six minutes, when Iwobi opened the scoring with a beautifully constructed goal. The Nigeria international started the move wide on the right before knocking the ball to Rodríguez, who flighted it over to Lucas Digne at the left-hand side of the box while Iwobi raced infield. When Digne laid the ball first-time back to Iwobi, the midfielder guided it expertly into the net from 15 yards.

Now it was Wolves’ turn to show how well they could improvise without key attackers. That has been a familiar challenge for them recently, as they came into this game having won only one of the seven league matches since losing Raúl Jiménez to a fractured skull.

At least Wolves beat Crystal Palace in the Cup on Friday but their scorer in that tie, Adama Traoré, was injured for this match, as was Daniel Podence. So Morgan Gibbs-White made his first start since being recalled from loan at Swansea. He began in a central role while Fabio Silva started on the left of the attack. But Wolves had Rayan Aït-Nouri and Ruben Neves to thank for their equaliser in the 13th minute.

Aït-Nouri created it by retrieving a cleared corner on the left and then dashing past Abdoulaye Doucouré and pinging the ball to Neves, who steered a studiously controlled volley into the net from eight yards.

That buoyed Wolves, who nearly took the lead four minutes later when Pedro Neto teed up Silva, whose shot from 12 yards demanded a smart save from Jordan Pickford.

Soon Rui Patrício had to deny Rodríguez at the other end. Both sides, cleverly drilled to be fluid, glowed with ambition in a fast-paced and entertaining opening to the contest. Each grew a little more circumspect as the first half advanced, however.

There was still plenty of zip to the passing and movement, especially from Wolves, but attacks foundered on solid defences. For Everton, the problem of not having a specialist striker became clear in the 45th minute when Digne delivered a sumptuous cross from the left into prime poaching territory, but no forward had anticipated it.

Wolves’ hunger for victory was clear from the start of the second half as they fizzed forward, far too slickly for Doucouré, who earned a booking for chopping down Neto. But the hosts struggled to make chances, so Nuno Espírito Santo chose to change the lines of attack, replacing Gibbs-White with Ki-Jana Hoever and shifting Silva into the centre. Everton looked like they needed a fresh approach too as Rodríguez and Sigurdsson dropped ever deeper, trying to compensate for the lack of creativity behind them but leaving Everton’s attack with no point whatsoever.

In the 76th minute Ancelotti decided it was time to introduce Richarlison. Within seconds of the Brazilian’s arrival, Everton took the lead, though that had nothing to do with the striker.

It owed everything to a wonderful cross from the left by another substitute, André Gomes, and a dominant header by Keane, who rose above Romain Saïss to plant the ball in the bottom corner. – Guardian