Celtic’s plasticine empire is collapsing amid arrogance and awful decisions 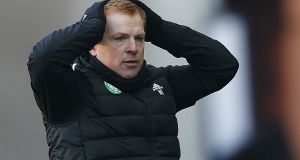 Celtic: The Implosion. The imagination of a scriptwriting genius would have been necessary to piece together a chain of events which are now far enough removed from fiction as to fatally undermine what was billed as a history-making season.

Grand plans relating to a 10th title in a row are long gone; instead, Celtic’s collective decision-making has reduced the club to a laughing stock. Their supporters, normally so fiercely defensive of reputation, have been united in horror at the unravelling of a set-up which appeared untouchable 12 months ago. It really didn’t take much to topple this plasticine empire.

There are dismal multimillion-pound transfer episodes, the case of the left back who breached travel rules for a holiday in Spain without the club’s knowledge, rows from Nicola Sturgeon, European embarrassment at the hands of Ferencvaros and Europa League teams who rattled in 19 goals in six group matches, even before we get to rampaging supporters outside Celtic Park as domestic dominance began to disintegrate.

Just when such noise had calmed to the point of acceptance – Rangers’ win in the Old Firm game of January 2nd secured the title in all but name – came a trip to Dubai and fallout which renders “ill-advised” as understatement of the year.

By the time Celtic took to the pitch against Hibernian on Monday night, 13 players and three coaches – including Neil Lennon, the manager – were in isolation. Celtic’s season-ticket holders, handed a streaming code for their money, watched a reserve team limp to a 1-1 draw as Lennon issued instructions to substitutes via air pods.

It sums up the incredible scenario that Christopher Jullien, taken to Dubai despite a long-term injury, was the player to test positive for Covid-19 and attract the attention of track and trace teams. Were it Celtic – and not Rangers – holding a 21-point advantage then fans really wouldn’t care less about Dubai and associated drama. But here we are: Celtic are toiling on the pitch and an unholy mess off it. Rangers’ league form has been exemplary but Steven Gerrard must be laughing himself silly.

Celtic’s board detest any charge of complacency. The club object to any assertion that their self-proclaimed scale is undermined by two-bit behaviour. Yet it is impossible to foresee any situation whereby Dermot Desmond, the absentee landlord, would abide by such gross mismanagement at any of his other businesses. Celtic’s Dubai shambles is indicative of dreadful decision-making and a culture of arrogance.

It cannot be emphasised often enough that Celtic should be in a different competitive stratosphere to this, owing to the years of leeway afforded by Rangers’ financial implosion. Instead, punters lapped up thrashings of Hamilton Accies as directors presided over managed decline. The means by which this has all come to a head is spectacular but the signs have been there for years. Lennon was offered his job in the dressingroom showers after a cup final.

The Celtic statement that confirmed the housebound status of the Dubai 16 was as extraordinary as it was audacious. Rather than offer any hint of remorse, this served as a reminder of an entitlement culture. “The reality is that a case could well have occurred had the team remained in Scotland, as other cases have done in Scottish football and across UK sport in the past week,” it read.

A club founded on grounds of decency and compassion has acted with blatant disregard for a troubled, wider picture in needlessly swanning off on a charter flight to the Middle East mid-pandemic. They go to Dubai every year, so why not go again? This is the attitude of a petulant teenager, with chutzpah boosted by the scores of observers too scared to criticise such a prominent entity.

John Kennedy, Celtic’s assistant manager, reported on Saturday that Shane Duffy would “miss the [Hibs] game because he’s left the bubble”. Duffy had departed Dubai early to attend to personal matters. By Monday night, the Irishman was playing at centre back.

Scottish clubs have indeed returned positive Covid cases, without the necessity for such a tally of isolations. Celtic aren’t at all used to being told they are in the wrong; and certainly not from Scottish football officialdom. Their level of power may well distort perspectives. An apology to Celtic’s supporters should have opened any bulletin. Instead? Hubris.

There are two strands to the Celtic trip. On the one hand, it was chronically tone deaf against a backdrop of severe restrictions at home and on-field underperformance. On the other, it looks from this distance that it was crazily inviting coronavirus risk. Celtic don’t fly to any domestic fixture.

As photos emerged of an apparently “relaxed” environment, scrutiny only intensified. “I do have doubts, based on how the club itself described it, about whether Celtic’s trip to Dubai was really essential,” said Sturgeon. “I have doubts based on some pictures I’ve seen whether adherence to bubble rules was strict enough.” Celtic didn’t break laws but they abused the spirit of them.

Gavin Strachan, left in dugout charge against Hibs, doubled down on the club’s stance. He said: “There’s regret that one person has caught the virus but there’s not a regret in terms of the permission we got to go and the protocols that we followed, which we have done the whole season. It’s regrettable that we got one positive, which we could have got at any time.

“It’s a trip that’s been done over the last few years and it has yielded very positive results, so the thinking behind it was to maintain that and try to galvanise and push in the second half of the season.” It may have escaped Strachan’s attention that a number of things deemed absolutely fine “over the last few years” are off the table for now.

Andy Walker, a man immersed in Celtic, was wonderfully coruscating during Sky’s Monday night coverage. “What the Celtic support deserve is a bit of contrition from someone with a bit of backbone at this club,” said the former striker. “They are being short-changed and it’s completely unacceptable.”

This mess leaves the Scottish Professional Football League – unimpressive enough in normal times, let alone a crisis – in something of a pickle. After St Mirren and Kilmarnock couldn’t play fixtures earlier in the season, 3-0 victories were handed to opponents. The clubs appealed. St Stephen’s Day – months after the fixtures in question – saw a hilarious but necessary reconfiguration of the table on account of said appeals.

Not only did the SPFL allow Celtic to skip over to Dubai, the league moved the Hibs match – much to the chagrin of the Edinburgh club – to facilitate it. At the point this nonsense was taking place, Celtic held two matches in hand. Neil Doncaster, the SPFL chief executive, had previously been very uptight about scheduling. Celtic were allowed to knock out midweeks while behind in fixtures on the basis of winter sun.

The SPFL appears far more interested in Covid outcomes than causes, especially with regards small clubs with small squads. Celtic played Hibs, hence the integrity of the competition and image damage beyond that don’t apparently matter.

Hibs asked for retesting at Celtic, a perfectly valid request even on an optics level, and were refused by their opponents and the SPFL. There is total silence from Doncaster, his chairman Murdoch MacLennan and non-executive directors implicated in yet another farce. This is, however, predictable.

Dubai will for ever serve as an inauspicious reference point in this Celtic campaign of 2020-21. Even in this, such a fickle business, it will take a lot for the club’s support to turn back on-side. The sequel will only depict a happy place if Celtic admit to glaring failings. – Guardian