Matt Doherty keen to get going again for club and country 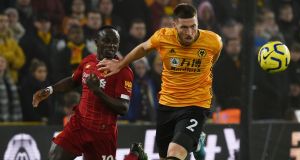 Wolves’ Matt Doherty holds off the challenge of Liverpool’s Sadio Mane during the Premier League match at Molineux back in January. Photograph: John Powell/Liverpool FC via Getty Images

His inclusion on a list of the 10 most in-form Premier League players prior to the English game shutting up shop came fractionally too late this week to put to Matt Doherty but he would probably have taken it in his stride.

The Dubliner makes plain in the most pleasant of ways, that he is “a confident player” who believes he “can make a difference” whenever he gets onto the pitch. Clearly happy now to be on the verge of a return to action at club level, his hope then is to start making much more of one for Ireland.

The early signs from recently installed manager Stephen Kenny have been generally encouraging. The pair had a Zoom call which, he says, went really well and Mick McCarthy’s successor had already described Ireland’s back four against Denmark in November, when Doherty rather than Séamus Coleman played, as one of the 10 best international defences in Europe.

Things are far from straightforward, though. Coleman, a popular figure with whom Doherty is particularly friendly, is to be Kenny’s captain and so there are certainly no guarantees. But the 28-year-old Wolves player is hopeful both that he will add to his remarkably low tally of nine caps and the team will flourish playing what many expect to be a more flowing brand of football.

He has some sense of what to expect from watching the under-21s play on television. He has heard more about the way Kenny’s side play from his father Tom, whose support of Sligo Rovers means he has been tuned into the manager’s many achievements, most obviously with Dundalk.

“And then when somebody is doing good things in the game you just get to hear it, really,” he says. “Of course it’s encouraging that the new manager said those things because he didn’t have to. He could have said nothing but in that game you had Enda [Stevens] who has been top form with Sheff U, I was top form with Wolves. Shane Duffy has been rock solid, never seems to dip in form and John Egan who everybody knows now is a top player.

“It was probably one of our best performances in quite a while and I think we were pretty hopeful about our chances in the playoffs after it. Obviously it didn’t happen the way we thought, though, and things have changed pretty dramatically since then. It is unfortunate for Mick [who he parted with on good terms] but the talent is there, the players are there, so if we can get the brand of football going then I’m sure that we can be quite a force.

“Obviously I wish I had more caps . . . yeah,” he acknowledges. “I’m just a confident player. I always feel that I can make a difference; that I can help if I’m on the pitch. So I don’t want to be on the bench. But we’re fortunate that in that one position, we just have some very good players and that’s just the way it is so I can’t complain too much. Séamus had been playing Premier League for 10 years, playing really well and he is the captain so I just have to keep playing as well as I can and see where it takes me.”

He talks about looking forward to September but admits he had no idea really how anything might progress against the backdrop of the coronavirus pandemic. Still, he is clearly in good spirits after his first week back in full training at Wolves.

Despite the same sort of day-to-day stresses experienced by pretty much everyone, Doherty says the break has had its upsides, primarily the time he has got to spend with his two young daughters Nya-Rose and Sia-Valentina. Like a few other fathers, though, he sounds just a little shell-shocked by the experience.

“They are two and one which, everybody knows, are not the easiest ages ever and it’s been challenging enough,” he says, his tone suggesting that there may well have been Saturday afternoons in stadiums when he has been obliged to do less chasing about.

“I hadn’t been so aware of their routine in the mornings because I would have been going out to work and it’s been different, getting a bit more involved and maybe learning a bit more patience. It’s been good, although I was still going to bed sometimes praying they didn’t wake up before seven. So it’s been different but it’s not like I’ve been just staring into space the whole time.”

On the football front, there was an inevitable sense of frustration about the season having been halted, not least because, like his club, Doherty was having another very good one. Over the course of nearly two top-flight campaigns Wolves have completely exceeded any reasonable expectations and he has established himself as one of the most exciting right-sided players in the league. He might have been forgiven for feeling that the timing of the current crisis was depriving him of time centre stage.

“I would have been more worried about that if I thought that it wasn’t going to come back,” he says, “but I never thought it would be abandoned. Financially, there was just too much money at stake for the clubs and the Premier League, so I thought we would be back but then you are constantly asking the question: ‘when?’”

The team, is much where those around the club expected it to be, he says. “I know other sides have struggled in their second season after coming up but they haven’t been as good as we are. I don’t want to say that: ‘Oh yeah, we are just better than the others’, but if you look, there is genuine, genuine quality in our team.”

On a personal level, he feels that Adama Traoré’s form this season has meant a slight shift in the role he performs and that he has not quite reached the heights of last season. It is still a very good time for him, he happily acknowledges.

Staying fit for the return has been a bit of an issue. Doherty generally sees running out on the road or in parks as a chore but says that, like many others, he came to look forward to it during lockdown. “What you really want to do is sit down and eat everything in the house,” he says, frankly. “You can never do it, you’ve got to be disciplined, but in the back of your head, you’re sitting there and thinking: ‘what’s in the press, what’s in the fridge?’ There are a load of different challenges.

The challenges that lie ahead now are rather more conventional. Wolves sit sixth in the table, just five points behind Chelsea who they are due to play on the last day of the season. They are also still in the Europa League having drawn the away leg of their round of 16 tie with Olympiacos 1-1 in an empty stadium.

“It’s a concern. That must have been an awful game to watch, players are inspired by the atmosphere inside stadiums and that felt really flat,” he says. “But we are going to have to get used to that. Maybe because we have been deprived of it all now, it won’t feel as though it matters so much but you want to achieve things in front of big crowds of excited supporters.

“What we can achieve hasn’t changed, though,” he says. This all came at a really bad time for us as a team because we had built up a lot of confidence and momentum after a few wins and everybody will be starting from scratch again now. Whoever can adapt the quickest will be successful, I think but we believe in ourselves, the players we have and the world-class manager.

“With nine games to go,we have a real opportunity to go on and do something really special.”