Marcus Rashford should have one target in his sights – Raheem Sterling

Can the Manchester United striker develop in the right way under Ole Gunnar Solskjær? 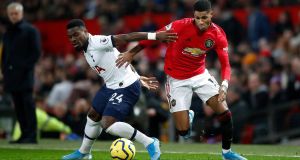 Marcus Rashford’s second goal against Tottenham on Wednesday night was, in many ways, a distillation of everything he does best. Photograph: Martin Rickett/PA Wire.

For a moment all is stillness. Marcus Rashford grinds to a halt. Old Trafford pauses with him. Rashford waits. There’s a wiggle of the toes. And then the explosion.

Rashford’s second goal against Tottenham on Wednesday night was, in many ways, a distillation of everything he does best. As Serge Aurier closed him down on the left flank, Rashford paused for an instant, waiting for his opponent to commit. A twitch of the boot was enough to convince Aurier that Rashford was planning to cut inside. And in that moment, with a conjuror’s cunning, Rashford was away: knocking the ball through Aurier’s legs, sprinting past him, burning around the outside of Moussa Sissoko – himself an exceptionally quick player – and eventually drawing the foul from which he would convert United’s winning penalty.

The pledge, the turn, the prestige. It was a goal of raw athleticism and outrageous smarts, of skill and patience and pure, facetious mastery. The penalty was Rashford’s second goal of the evening, having peppered Paulo Gazzaniga with shots all night, and as United moved back into the top six for the first time since September, the consensus appeared to be that Rashford, with 12 goals in his last 13 games for club and country, is on the verge of something. The question, as he prepares to step out at the Etihad Stadium for the 179th Manchester derby, is what.

This will be Rashford’s eighth Manchester derby and he is yet to produce a display to match the impact of his first, in 2016, when he marked a 1-0 United win at the Etihad with the only goal of the game. Nevertheless he is a player for the big occasion: 17 of his 36 Premier League goals have come against City, Liverpool, Tottenham, Chelsea, Arsenal and Leicester, by common consent United’s six strongest opponents. Whatever the opposite of a flat-track bully is, that’s Rashford.

And yet, for all the talk of a breakthrough – he’s never scored more than 10 league goals in a season and currently has nine – this is a campaign that has only recently kicked into life. For the first two months of the season Rashford’s vague listlessness seemed to mirror United’s. At one point he went on a run of one goal in 12 games.

This remains, in many ways, the hit on Rashford: a tendency towards inconsistency, curious lapses in focus, a paucity of options for breaking down deep-set defences. What is interesting is that these were exactly the same criticisms being levelled at one of today’s opponents.

Rashford turned 22 just over a month ago. Raheem Sterling turns 24 tomorrow, and provides a salutary lesson in how a promising young player propels himself to the next level. When Sterling was the age Rashford is now, he had scored 23 goals in 114 league games – a rate of roughly one in five – and won nothing except the League Cup. Ever since, 51 in 126 – a rate of two in five – and two Premier League titles. The pressing issue is whether Rashford’s purple patch is just that or the beginnings of a Sterling-esque metamorphosis that will see him convert his rich, base-metal promise into reliable, trophy-winning excellence.

Of course, the comparison is not a perfect one. Rashford and Sterling may both cut in off the left flank with pace, sharp one-twos and a keen nose for goal, but they are subtly different in many ways. Rashford is taller and stronger than Sterling, a better header of the ball, possesses a cleaner and more powerful shot and a more reliable set piece. In virtually every other area, however, you would probably take Sterling over him, a testament to the way in which he has matured and honed his game over the last couple of seasons under Pep Guardiola.

Can Rashford grow in the same way under Ole Gunnar Solskjær that Sterling has under Guardiola? It’s not a process we should assume he can undertake on his own: players do not simply develop automatically, like house plants left in a sunny window. Sterling owes his improvement not only to his ferocious work ethic but to the little details and snatches of advice that make the good players great: when to take on his man and when to recycle, timing and positioning, composure, whether to trap a ball with the outside of a foot or take it in his stride.

Rashford, meanwhile, is still a player who owes his goals to intuition and individual flourishes as much as careful plotting. This, perhaps, explains why his record is so good against better teams, where space is more plentiful, counterattacks a more useful tactic and games far more likely to turn on a single moment of brilliance. But it also highlights the biggest area of opportunity in his game: movement, reading buildup, finding himself in the positions to score the ugly goals that have swollen Sterling’s output.

Will he get that sort of help at United? Solskjær’s comments after the Tottenham game, underlining Rashford’s “courage” and “directness”, describing him like a striker who looked as if he were “in the playground with his mates”, suggested he sees Rashford’s gift in largely discrete, individualistic terms rather than as part of a more cultivated development. In short: he is good and, if he is happy, he’ll carry on being good. The hope is that behind closed doors, Solskjær is offering Rashford the sort of bespoke insights that made him himself such a devilishly shrewd striker.

And perhaps the wider moral here is one of patience. Sterling did not suddenly start banging them in as soon as he turned 22: improvement came in stages, by degrees, a slow melting of potential. Likewise Rashford is a striker who has spent much of his career in a struggling team, oscillating between the No 9 and the left-wing position, and who, despite playing more than 100 league games, is a month younger than Tammy Abraham.

No player’s career goes in a straight line. And for any footballer of great promise there’s a point just before the big explosion, just before he takes the plunge, when nothing very much seems to be happening. A shimmy here, a shimmy there. You wonder which way he’s going to go. And for a moment all is stillness.