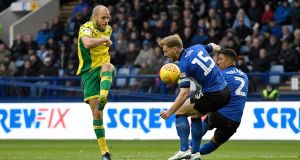 Teemu Pukki in action for Norwich City against Tom Lees and Liam Palmer of Sheffield Wednesday during the Championship match at Hillsborough. Photograph: George Wood/Getty Images

Norwich moved top of the Championship with a thumping 4-0 win at Sheffield Wednesday.

Mario Vrancic missed an early penalty but the Canaries took control with two quickfire goals early in the second half.

The first came when Teemu Pukki turned in Vrancic’s deflected effort, before Jamal Lewis’s cross looped to Emi Buendia who made it two in the 56th minute.

Pukki tapped in his eighth of the season from Max Aarons’s cross and Sheffield Wednesday goalkeeper Cameron Dawson gifted a fourth – and almost a fifth – to Dennis Srbeny.

The win lifted the Canaries ahead of Sheffield United and Middlesbrough, though they could still be overhauled by Leeds on Sunday.

Derby climbed within two points of the summit after coming from behind to beat Birmingham 3-1.

Jack Marriott rounded off the scoring with his fifth goal in six games after being played in by Craig Forsyth.

West Brom lost ground with a shock 1-0 defeat at Hull, Fraizer Campbell with a deserved winner shortly before half-time after Jackson Irvine’s header rebounded off the bar.

The Tigers remained in the relegation zone despite that win but are now five points clear of Ipswich, who were held by Preston after a dramatic cameo by substitute Paul Gallagher.

Freddie Sears’s penalty just before the interval put Ipswich ahead but Gallagher equalised with a free-kick just two minutes after coming on.

North End immediately lost goalkeeper Chris Maxwell to a red card, though, forcing Gallagher to take the gloves for the remaining quarter-hour plus eight added minutes as Preston had made all three of their substitutions.

Reading earned an overdue win as they dramatically saw off Bristol City 3-2.

Yakou Meite’s opener was cancelled out by Marlon Pack and though Liam Kelly’s long-range strike restored Reading’s lead in first-half stoppage time, there was still time for Josh Brownhill to head City level at the break.

Leandro Bacuna grabbed a second-half winner after linking up well with Garath McCleary on the right wing.

The lead lasted until the 79th when goalkeeper Kristoffer Nordfeldt’s foul on Jamie Proctor and Leroy Fer’s handball allowed Irish midfielder Manning to turn the game around.

Sergi Canos scored the opener three minutes after half-time and Ollie Watkins added a late second after an excellent link-up with Neal Maupay.

1 Owen Doyle: Creeping professionalism of schools rugby a threat to the game
2 Niall Quinn happy to step into the breach at FAI
3 McNamara outlines the scale of opportunity for Ireland’s U-20s
4 Cox calls for a more relaxed transfer regime in the GAA
5 Officials and referees brace themselves as new GAA rules kick in
Real news has value SUBSCRIBE