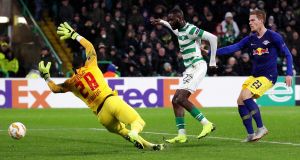 Odsonne Edouard gave Celtic a massive Europa League boost with a dramatic winning goal in the 2-1 victory over RB Leipzig at Parkhead.

Brendan Rodgers’s side went into the game with three points from three Group B games, including a 2-0 defeat to the German outfit at the Red Bull Arena last month, but Kieran Tierney’s early strike gave them a deserved interval lead.

The visitors levelled in the 78th minute through striker Jean-Kevin Augustin but only a minute later French forward Edouard, playing his 50th game in green and white, restored the Hoops’ lead.

Edouard’s winner took the Scottish champions on to six points, the same as Ralf Rangnick’s side, who have a better goal difference and head-to-head.

Celtic travel to Trondheim to play Rosenborg, already eliminated, on November 29th before hosting Salzburg, who have maximum points, in the last game.

Rangers let a lead slip three times in Russia as two goals in the space of a minute consigned Steven Gerrard’s side to a 4-3 defeat by Spartak Moscow.

An early own goal and strikes from Daniel Candeias and Glenn Middleton each put Rangers ahead and Alfredo Morelos had a goal controversially ruled out for offside with the visitors 3-2 in front near the end of a breathless first half.

But Luiz Adriano headed another equaliser in the 58th minute and Connor Goldson - who scored a first-half own goal – inadvertently diverted Sofiane Hanni’s strike into the net seconds later.

Nikola Katic hit a post for Rangers in time added on to an extraordinary game.

The result blew open Group G as Rangers, pre-match leaders, slipped to third, one point behind Villarreal and one ahead of Rapid Vienna.

Longford football team of 1968 still deserve special mention 07:00
Niall Quinn and Brian Kerr differ on role of outsiders in FAI 06:00
New team, fresh start, has Dan Martin shooting for the stages 06:00
Sporting Cathedrals: Cheltenham reveals all about the wonder of racing 06:00
Fathers, sons and soccer: Reflections on the family business 06:00