Power base: How Klopp weaponised Anfield to make Liverpool unstoppable 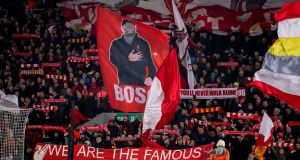 Anfield has always been an energy source, a place of restless power, of something that wants to be released. Photograph: Matthew Ashton/AMA/Getty Images

Pep Guardiola calls it That Place. Lionel Messi cried in the dressing room the last time he was there. It isn’t hard to see why Anfield gets under people’s skin.

Even the journey there has a distinct tone and texture, something to do with the angles of the place, the topography of a port city, the way the light beyond the houses carries a sense of being at the end of things. It’s there in the way the streets melt into closes and dead ends, funnelling the crowd one way. There’s never any doubt where you’re headed. Or these days, what’s going to happen when you get there.

The weaponising of Anfield: this has been a significant part of Liverpool’s extraordinary success in the last year. It is also a good way of trying to understand it. Because make no mistake, this is still pretty hard to get your head around. Most sporting triumphs seem to correspond to a familiar story type. Football has always been a business of comedy, tragedy, farce and the rest. The history of Manchester United through the Busby and Fergie years still has the feel of an epic family saga: power, succession, patriarchs and, in the post-godfather vacuum, a lineage of sweating, weak-chinned Fredos.

How about Liverpool? The most interesting thing about the current run is the way it goes beyond the everyday rules, has become fantastical. A woman in Buenos Aires has learned how to fly. A snowman that can bench-press 400lb has been discovered. And a football team in the north-west of England have won 34 of their last 35 league games. Welcome to Jürgen Klopp’s Liverpool: an exercise in magic realism.

We have of course seen extreme success quite recently. Manchester City’s brilliant team of the last two years reached 100 points and was in some ways a more beautiful machine. But this is something else. Should Liverpool beat Norwich on Saturday they will be 25 points clear at the top. Nobody has ever done this before. How do we respond to it?

Either way, you keep coming back to Anfield, not so much a fortress as a tangible presence, a place Liverpool’s players seem to carry around with them like a mobile battery pack, and arguably the Premier League player of the year in its own right. The basic numbers are wild. Liverpool average three goals every home league game. They’re on a run of 11½ hours without conceding. Look at the fixtures and it is conceivable they could end up the first team to win every home league game in a season.

Beyond this, there is the feeling of the place. All grounds have their shadows, their lines of power. With Anfield there is a sense right now of an uninterrupted communion taking place, of watching the action through that shared compound eye, the players running through a haze, like men playing football on the deck of a fireship.

Liverpool are above all a thrillingly physical team, and all the more so in that nexus of shared red fury

This is of course self-sustaining, self-mythologising, and deeply schmaltzy. But then good things often are. And Anfield hasn’t always been like this. It has been quiet at times, even a little angsty. Its re-gearing has been deliberate and brilliantly staged.

Certainly Klopp has helped. In time the draw with West Brom two years ago might come to look like a staging post. That was the game when Klopp forced his players do that linked-hands salute to the Kop, a moment where he became suddenly the embarrassing uncle who makes you all sing at Christmas, but who actually knows what’s good for you and doesn’t care what it looks like.

Klopp makes remarks about supporters leaving early. He talks about the essential power of home. Even his style of play fits the staging. Liverpool are above all a thrillingly physical team, and all the more so in that nexus of shared red fury. It’s no accident 11 members of that supremely coherent squad have never actually lost at home. It is currently 2½ years since anyone beat Liverpool at Anfield when Jordan Henderson was in the team . This is unexpected.

But it is also the end of a process. Like a lot of those grand old English grounds, Anfield has always been an energy source, a place of restless power, of something that wants to be released. For owners as competent as FSG, every part of the club is a potential point of leverage, an edge to be gained.

The Emirates has spent 15 years trying to get over itself. West Ham play football in a shopping centre

So it has become with the ground. Staying put and making it work was always a brilliant decision. Enlarging it now might be another, although care is required. The weaponising of Anfield: this has also been a delicate business, a balance of emotion and economics, memory and desire.

It is also a point of contrast with others. So many top-tier clubs have found that home has become parasitic, a drain, an obstacle to be overcome. The Emirates has spent 15 years trying to get over itself. West Ham play football in a shopping centre. Old Trafford, which has its own vast reserves of energy, has become a dark star. Anyone buying that place now needs to go around with a priest and a ju-ju man flushing out the zombies and the poltergeists, waving their warlock stick, chasing the ghouls from the eaves.

The sense of place is one of those things that is supposed to have died in football, its power dissipated by remote fandom, and the feeling of a sport being desiccated into an arm of athletic science.

Anfield suggests something else. An edge has been found here, and an engine for this remarkable team. Games will no doubt be lost on the way, but the title race already feels like an extended lap of the bases. When the final stroke does fall, how much more fitting if it could come at That Place.

1 Nicholas Quinn: ‘Swimming became how I dealt with grief’
2 A beautiful, happy accident - Moneyball is the best sports movie ever
3 Is it time for the New England Patriots to tear it down and start again?
4 Ian McKinley: ‘You do take for granted the simple things in life’
5 Tokyo Olympics likely to start on July 23rd 2021, reports
Real news has value SUBSCRIBE