‘No, he’s not tired. If I ask him there’s absolutely no chance he’ll say he’s tired’ 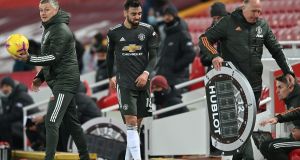 Fernandes’ player of the month award for December was a record-breaking fourth of the year, yet the midfielder has failed to scale the same heights in the opening weeks of 2021.

The playmaker was below par in Sunday’s 0-0 draw at Liverpool – something pointed out by former United skipper Roy Keane – but Solskjær does not believe the frantic festive schedule has taken its toll on the Portuguese.

“His form is very good,” the United boss said. “He was just voted player of the month. He’s not tired, no. No chance.

“He is one of the players who runs and covers the ground in every single game. Very good at recovering, very good at recharging his batteries.

“If he’d scored his free-kick or just had a little air on the ball when Luke [Shaw] put the cross in, he would have been lauded as the best player in the Premier League again.

“Since he’s come in, he’s been absolutely immense. No, he’s not tired. If I ask him there’s absolutely no chance he’ll say he’s tired.

“He’s expected to create goals, score goals and sometimes the margins are against him.

“That free-kick, I saw that one in! There was a couple of passes that he plays through and it’s just marginal as to whether the player was on or off.

“So he’s always on the verge of creating something, even when he loses the ball, and that’s the position I want him in and that’s what he’s been told to do. He has to be the creative one. I want him to play the passes he sees.”

Fernandes could well play a key role for United on Wednesday as Solskjær leads his table-topping side to improving Fulham, with the Norwegian waiting to see if there are any unwanted surprises regarding his options.

“Well, we’ve not got test results from Covid yet and that’s almost 30 hours ago since we did the testing, so hopefully we get them soon,” Solskjær said.

“Everyone trained this morning more or less. Brandon [Williams] and Phil Jones didn’t train and the rest were on the pitch.”

United’s ability to rotate and maintain fitness during such a frantic period has been key to their recent rise.

Solskjær has underlined the importance of maintaining that advantageous strength in depth this month, meaning the Norwegian will have to be careful when deciding who can follow Timothy Fosu-Mensah out of the club.

Marcos Rojo and Sergio Romero have been told they can leave ahead of their contracts expiring in the summer, while there is speculation about the likes of Juan Mata and Jesse Lingard.

Asked if the latter would still be at Old Trafford come the end of January, he said: “Well, I don’t want to go into individuals but we can probably allow maybe one or two more to go out.

“But then one of the strengths we have is that we have had a fit and deep squad. Strength in depth.

“So, we don’t want to give our advantage away by easing off on our players. I can’t give you a better answer than that.”

Odion Ighalo is set to leave as his loan deal from Shanghai Shenhua expires on January 30th, but exciting 18-year-old talent Amad Diallo has bolstered United’s options after joining from Atalanta.

“Very good,” said Solskjær of his first impressions of the player. “He can handle the ball, he’s enjoyed training, he makes a difference in training, which is quite remarkable at his age.

“So yeah, some adjustment to settle into the hustle and bustle or the physical part of the Premier League, but I can’t see it being too long until he’s in the squad.”

Asked if it is likely to be four or five weeks until Diallo is involved, Solskjær said: “It might be quicker than that. Who knows?

“He’s definitely settled down well, the players have taken to him and he’s a good character. Very polite, smiley boy, who works really hard.

“He’s doing his sessions, getting used to us. Of course, there’s always a period of adjustment needed but he’s settling in well.”