Unite the Union Champions Cup could serve as a stepping stone 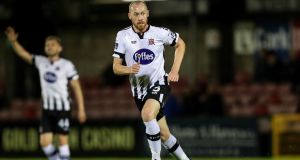 Dundalk’s Chris Shields says he would be pleased to see the Unite the Union Champions Cup serve as a stepping stone to an all island league. Photograph: Inpho

The ongoing debate regarding the desirability of an all island league might make the timing of the Unite the Union Champions Cup seem proactively well planned but, hey, we all know better than that. The launch of the new cross border competition is pure coincidence although clearly there is the potential for how these two games between Linfield and Dundalk go over the next few days to have longer term and larger consequences.

The fact that both clubs have issued fairly stern instructions to supporters only to travel to the respective away games in organised buses is an indication of their concern that there might be trouble.

Oddly, the Setanta Cup produced barely any over the course of its near decade long existence but the particular line up on this occasion means that people inevitably look back well beyond 2011 when Dundalk beat the Irish League side 6-4 over two legs in that competition.

If Friday night’s first leg (live on Premier Sports, kick-off 7.45) at what is officially known these days as the National Football Stadium at Windsor Park is half as entertaining as the 5-3 away win in which Daniel Kearns got a hat-trick for Dundalk back then, it could be a very positive advertisement for greater engagement between the island’s bigger and better clubs.

The notion that they somehow inhabit entirely different universes at the moment, though, is slightly undermined by the fact that Kearns is at the Belfast club these days.

Both sides will want to win the thing for even if there wasn’t a fair bit of pride at stake, the prize money is decent with each guaranteed €25,000 and the winners getting as much as that again. It means Linfield could pocket a bigger cheque from Unite after these two games than they got for winning the Irish League last season.

The northerners have sounded generally open to the idea of a wider all island competition while Dundalk’s American chairman, Mike Teacy, has been vociferously supportive and Chris Shields seems likely to be speaking for quite a few players at leading clubs when he says he would be pleased to see this serve as a stepping stone.

“The idea of it is brilliant but it’s just a question of getting it across the line,” he says.

The midfielder returns after missing the FAI Cup final through suspension but Pat McEleney and Sean Murray will be absent due to injury. Georgie Kelly, Michael Duffy and Sean Gannon all face late fitness tests.

David Healy, whose side lie fourth in the league and have a little bit of ground to make up on leaders, Coleraine, is expected to start his strongest side for the home game before weighing up how things stand going into Monday second leg.