Lucky bounce and flash of class gets Spurs over the line 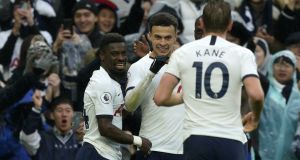 A lucky bounce and a flash of class made the difference for Tottenham. It was a messy, uneven display for the most part and José Mourinho ended grateful to have a finisher as ruthless as Harry Kane in his ranks. Kane’s equaliser arrived when a loose clearance fell his way, giving him the chance to puncture the frustration in the stands, and the points belonged to Spurs when Dele Alli elevated an otherwise ineffective showing with a beautiful winning goal.

It felt harsh on Brighton & Hove Albion, who will look back on the moment when Aaron Connolly missed a glorious chance to double their lead at the start of the second half. Yet Graham Potter’s side have one win in their past nine games for a reason. Spurs had greater quality in the final third. Alli’s inspiration defined the game and there was also an impressive cameo from Christian Eriksen, reminding everyone that Spurs will not find it easy to replace his creativity if he leaves during the January transfer window.

This was a big win for a team lagging behind in the race to finish in the top four. It had been a difficult few days for Spurs, who are still conducting their investigation into the racial abuse of Chelsea’s Antonio Rüdiger last Sunday, and their play was littered with errors from the start. There was no flow, no wit, even though Mourinho tried to shake things up after his team’s shocker against Chelsea. Harry Winks came in for Eric Dier and the suspension of Son Heung-min meant there was a first league start for Ryan Sessegnon, who was replaced by Giovani Lo Celso 56 minutes into his first league start since his summer move from Fulham.

There was intrigue in the Spurs lineup. It was hard not to see the decision to start a player of Sessegnon’s inexperience over Eriksen as a clear sign that Mourinho wants rid of the Dane and there were plenty of raised eyebrows at Tanguy Ndombele not even meriting a place on the bench. Given that the £53.8m midfielder was available for selection, it had the feel of a pointed omission.

The problem with leaving out Ndombele was that Spurs hardly resembled a side with no need for their record buy. Their football was stodgy and Brighton, who mimicked Chelsea’s 3-4-2-1 system, played the slicker football during the opening period. There was always space for Bernardo, the left wing-back, and his combinations with Aaron Mooy caused problems for the positionally suspect Serge Aurier. Connolly was a pest on his own up front and the visitors threatened in the 12th minute, Steven Alzate’s rasping drive from long range forcing Paulo Gazzaniga to tip wide.

Spurs looked blunt, though they thought they had the lead in the 24th minute. Winks, determined to show that his ability to run a game from deep makes him a better bet in the middle than Dier, lifted a fine pass over the top. Kane poked the ball beyond Mat Ryan, Brighton’s goalkeeper, and for a brief moment Spurs felt the tension lifting – until a VAR review showed the striker had strayed offside.

The home fans howled in frustration and the unease deepened. Danger beckoned when Winks, who will be suspended for the trip to Norwich on Saturday, fouled Ezequiel Schelotto on the right. The delivery from Pascal Gross was potent and Adam Webster rumbled in unchallenged, rose higher than anyone in white and powered a header beyond Gazzaniga.

Spurs were booed off at the break and they were fortunate not to fall further behind at the start of the second half. Bernardo crossed from the left but Connolly got it all wrong after stealing between Toby Alderweireld and Davinson Sánchez. The striker mistimed his jump and the ball looped wide off his shoulder.

It was not long before Kane was showing Connolly how to finish. Even then, however, the Spurs captain’s equaliser was entirely down to rare carelessness from Brighton, Webster’s heavy touch bouncing off Stephens and running through to Kane, who slammed home the rebound after seeing his first effort saved by Ryan.

Brighton, who were without the unwell Lewis Dunk in defence, continued to show ambition and almost restored their lead when Gross tested Gazzaniga with a thunderous free-kick. Yet Spurs finally found some poise when Winks made way for Eriksen, who played a pivotal role in the decisive goal. It was Eriksen who dropped deep to pick out Aurier, pushing high, and when the right-back cushioned the ball down it was left to Alli to lift a delightful finish over Ryan.

1 Georgia and Fiji in line to join Six Nations sides in eight-team tournament
2 All in the Game: Jack fact-cheques money story
3 Ken Early: Another Mourinho masterclass in going through the motions
4 Malachy Clerkin: Sleep well Jack, you made us all happy
5 Stephen Scullion: ‘Athletes will do long-term serious damage chasing those results’
Real news has value SUBSCRIBE