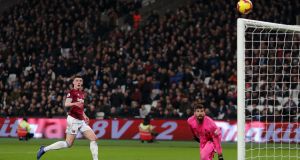 In different circumstances, an entertaining away draw with opponents as enterprising as West Ham would not be seen as a bad result. This was the second successive game when stage fright gripped Liverpool. Their lead over Manchester City is three points and the reigning champions will go top if they win at Everton on Wednesday night.

Liverpool’s main objective was to relax, shut out the noise and play their natural game. They had nothing to gain from second-guessing themselves against a team as anarchic as West Ham. After letting nerves cramp their style during last week’s draw with Leicester, when they missed a chance to accelerate away from City, Liverpool began their latest assignment knowing they could not afford to give their closest challengers further encouragement.

Not that the message seemed to have filtered through to the players during a difficult opening period. Evidence of City’s silky swagger returning during their win over Arsenal on Sunday had raised the stakes and City must have been encouraged to see early signs of edginess in Liverpool.

West Ham flew forward from the first whistle, with the bright and inventive Felipe Anderson eager to test out James Milner’s defensive nous at right back, and the hosts looked more than capable of coping without the injured Marko Arnautovic leading their attack.

Manuel Pellegrini’s way is to play on the front foot against every opponent. Although West Ham are drifting in mid-table and out of the FA Cup after a dismal defeat to AFC Wimbledon, there was no chance of them playing with caution. Javier Hernández stung Alisson from long range and the little Mexican ought to have scored after twisting past Virgil van Dijk in the third minute, only to bend his shot inches wide.

Aaron Cresswell also went close with a fizzing drive from the edge of the area, but there were flickers from Liverpool at the other end, Roberto Firmino scuffing a shot from the edge, Andy Robertson causing problems for Ryan Fredericks on the left flank. Neither defence looked secure.

Eventually, Liverpool shook their heads clear, remembering that they had scored 16 goals in their previous four meetings with West Ham, and they snatched the lead. Making his fourth league start of the season, Adam Lallana created the danger with a lovely pass into space down the right. Milner was at least a yard offside when the ball reached him. The flag stayed down and Milner crossed for Sadio Mané, who spun Issa Diop and fired past Lukasz Fabianski.

How the Liverpool fans roared, sensing the pressure valve had been lifted. Yet there have been hints of defensive vulnerability from the league’s pacesetters in recent weeks and West Ham reeled them in with a free-kick routine six minutes later. As Liverpool waited for a cross, Anderson and Robert Snodgrass combined to release Michail Antonio, who held off Naby Keita before leaving Alisson rooted to the spot with a sharp finish.

Liverpool were suffering without the leadership of Jordan Henderson and energy of Georginio Wijnaldum in midfield, where Keita was struggling to assert himself against Declan Rice and Mark Noble, and West Ham should have been ahead at the break. Another free-kick from Anderson deserved a better finish from Rice, who was aghast to put his free header over.

These are the occasions when the elite players prove their class. The contest had become a test of Liverpool’s mettle and they needed more from Mohamed Salah as the second half wore on. The Egyptian was finding it hard to shake off Cresswell, West Ham’s diligent left back. Instead, it was Anderson who was threatening to steal the limelight, always demanding the ball, always willing to run at defenders, luring Joel Matip into a clumsy foul with piece of skill that left the Liverpool centre back looking dizzy.

Liverpool started to rush their passes. Team-mates were beginning to glare at each other after snatched decisions in the final third. With the minutes ticking away and the anxiety rising, hope flared when Salah wriggled through on the right and made to shape one of those trademark curling shots into the far corner, but he aimed it too close to Fabianski. It was beginning to feel like one of those nights.

Klopp made his first change with 21 minutes left, replacing the tiring Lallana with Xherdan Shaqiri, who has made some vital contributions as a substitute this season.

West Ham were protecting Fabianski’s goal with impressive organisation, with Rice so perceptive in his screening role, and they went closest to forcing a second goal, Noble’s volley flying narrowly over the angle of post and bar.

Liverpool cried out in vain for a moment of inspiration. Klopp turned to his bench again, the disappointing Firmino making way for Divock Origi, but his side’s threat had fizzled out long before the end. – Guardian