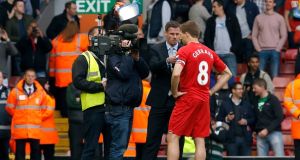 The league championship was the one club trophy that eluded the former Liverpool captain during his illustrious playing career, with his infamous slip against Chelsea in 2014 contributing to the near-miss under Brendan Rodgers. Gerrard also finished second with Liverpool in 2002 and 2009 but he insists that anguish has been alleviated by the achievement of Jürgen Klopp’s side this season.

In the latest Match of the Day: Top 10 podcast, the Rangers manager says: “First and foremost, for me it was fantastic to bury a few demons; not all the demons but obviously from [2014]it was certainly a big relief. Being a Liverpool fan and ex-player I’ve known the big, long wait and I’m still in touch with a lot of the players that are in that dressing room so a lot of them shared that pain with me.

“It was fantastic for everyone connected to the club but it was mixed emotions in many ways because of my own experiences, being a fan and ex-player and a lot of my family are Liverpool fans as well. To be honest with you, I’m still on a really big high watching all of the TV coverage and seeing all of the emotions flying about.”

The former England captain told the podcast he had “a lot of regrets” over his international career and believes a strong manager would have accomplished more than Sven-Göran Eriksson, Steve McClaren, Fabio Capello and Roy Hodgson. “Looking back, we needed a manager who was bigger than all of those individual players,” he said.

“There was managers available at the time, for example Rafa Benítez, but he might not wanted to have been an international manager at that time. I look at managers now that are bigger than the team: Klopp, Mourinho and Guardiola. I think someone like that who was above the golden generation who was prepared to make the tough decisions would have got more out of that group of players.” - Guardian

1 Gordon D'Arcy: Ireland must go after victory by frightening France into mistakes
2 Henshaw the only change as Andy Farrell names Ireland team for Paris
3 Warren Gatland: England players could miss Lions tour if not released for Japan warm-up
4 Seán Moran: Will a silent, empty Hill help to loosen Dublin’s grip on Sam?
5 Cian Healy: ‘Realistically I got away with murder when I was younger’
Real news has value SUBSCRIBE