Liverpool on a run of seven matches in 22 days, with their resources stretched by injuries and several positives tests for Covid 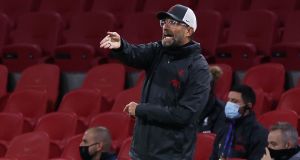 Liverpool’s Jürgen Klopp: “Professional football at the level we play is a little like Formula One in comparison to driving a normal car.” Photograph: Kenzo Tribouillard/AFP via Getty Images

Jürgen Klopp has described this season as the most challenging of his managerial career because of the condensed fixture schedule resulting from Covid-19.

Liverpool have commenced a run of seven matches in 22 days, and had their resources stretched not only by injuries to the likes of players such as Virgil van Dijk and Alisson but by several positives tests for Covid-19.

The unprecedented complications of the pandemic, coupled with the lack of recovery time between matches, has put a strain on all managers who also have to deal with losing players to international duty, according to Klopp.

The Liverpool manager, who is close to having Alisson available again after a shoulder injury, said: “Yes it is [the most challenging season for a manager] and it will become more challenging. It is already. Life is more challenging than what I ever experienced before, and with football it is no different. It’s what we are talking about constantly when we try to find solutions. We need help from everybody just to bring the boys through it.

“I have no problem that we have to play again and I will not moan about anything, but with this schedule thing we have to make sure that the teams who play midweek don’t play 12.30 on Saturday.

“If you play Tuesday in the Champions League, for example, then 12.30 Saturday is fine. If you play Wednesday then Saturday 12.30 is ‘oh my god!’ We did it once and it’s, ‘okay –e do it’, but to do it twice, three times, that is really the problem. We need to have the time to rest.”

Liverpool players, who are at home to Sheffield United on Saturday evening, have a workload of 20 games plus two international breaks from the beginning of October until the end of December.

Klopp added: “I know people don’t want to hear it and they go back to all the other things they say about professional football players. But professional football at the level we play is a little like Formula One in comparison to driving a normal car. Everyone can drive a car but it is difficult to drive at 300mph in a pretty close area and then hope that your brakes work.

“That is pretty much what professional football is – all on the highest speed, with the highest intensity. And for that you have to have the best brakes available. I’m not the only one who thinks like that. I know that all the other managers involved in international football see things exactly the same.”

3 Malachy Clerkin’s sports books of the year for 2020