The biggest game in their history? Ireland women v Ukraine - all you need to know 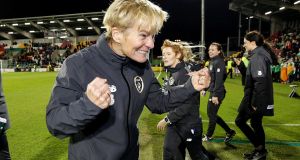 So, how important is Ireland’s game against Ukraine on Friday?

Huge! In fact, it’s probably the biggest in the history of our women’s international team. Even a draw would guarantee them the runners-up spot in their group, and that would earn them a place in the Euro 2022 playoffs - it could even be enough for automatic qualification.

And when is it?

The match kicks off at 5pm Irish time. You can watch it on RTÉ 2 - or follow all of the action via the Irish Times liveblog.

Have Ireland ever qualified for the Euros before?

They haven’t. They’ve tried 10 times, starting in 1984, and have had no joy either in their seven attempts to qualify for the World Cup, so if they could make it this time, it would be their major-tournament debut.

How many teams qualify in all?

There are 15 spots up for grabs, and the successful nations will join hosts England in the tournament, originally scheduled for next summer, in July of 2022. In all, a record 54 countries entered the qualifying stages, including first timers Kosovo and Cyprus.

How does qualification work?

There are two groups of six and seven of five - the nine group winners and the three best runners-up automatically qualify, the other six second-placed teams go in to the playoffs. In those groups of six, results against the bottom teams don’t count when figuring out the best runners-up.

So, how is Ireland’s group shaping up?

With two games to go, away to Ukraine and at home to Germany, they’re looking good for the runners-up spot. The Germans, who’ve won all six of their games so far, scoring 37 and conceding none (none!), are five points clear of Ireland who are seven ahead of Ukraine - but Ukraine have a game in hand. You can discount the bottom two teams, Greece and Montenegro.

Ireland have had a good campaign, then?

They have - played six, won four, drew one, lost one. The one bummer in those results was the draw away to Greece, who equalised in the 93rd minute of the game in Athens last November. But there was no shame in their only defeat, a 3-0 loss to Germany in Essen last month. The Germans, after all, put 10 past Montenegro and beat Ukraine 8-0 home and away.

Would it take a miracle to catch Germany?

Pretty much. Because Germany have a far superior goal difference, they only need a point from their two remaining games to win the group. Before they play Ireland in their final game, they’re at home to Greece - and they beat them 5-0 away.

Can Ireland be beaten to second place in their group?

They can if they lose to Ukraine on Friday. Ukraine would then be four points behind but with two games left to play - and they’re against Greece and Montenegro. They could, then, finish on 15 points, leaving Ireland needing to beat Germany in their final game. And that’s the mother of all asks.

How good are Ukraine?

Well, they’re 26th in the Fifa World Rankings, five places ahead of Ireland, so they’re second seeds in the group. But when the sides met in Tallaght a year ago, in what was Vera Pauw’s first game in charge, Ireland prevailed. Just about, though. Ukraine fought back from 2-0 down to level the match, before a 52nd minute own goal gave Ireland the points.

So a draw against Ukraine would be enough for Ireland to guarantee second place?

It would - Ireland would then be on 14 points and the most Ukraine could finish on would be 13.

So, what are Ireland’s chances of finishing as one of the three best runners-up?

It will be very, very tight, and could well come down to goal difference. As it stands, they are fourth in the runners-up standings, but if they were to win their final two games and get to 19 points they’d almost certainly be in that top three. Even getting to 16 would give them a decent chance. But it’ll be a struggle to beat the points totals of the runners-up in groups B and G, where Denmark and Italy (B) and Austria and France (G) have perfect records so far - although both top twos still have to play each other home and away. The other six groups are way too close to call, with games between rivals for second place still to come in most cases. But if results go as expected, then 16 points could be enough to finish as one of the three best runners-up.

When will we know for sure?

Possibly not until February of next year because groups D and E don’t play their final games until then.

When will the play-offs be held?

They’re scheduled for April 5th and 13th next year.

How are the group runners-up ranked?