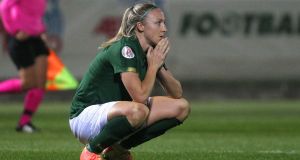 Louise Quinn after the final whistle of the Republic of Ireland’s European Championship qualifier against Ukraine at the Obolon Arena in Kiev. Photograph: Aleksandar Djorovic/Inpho

After all the progress that has been made during the past few years, Ireland’s chances of qualifying for a first major tournament may have ended in Kiev on Friday to what were key familiar failings in the old days . . . the concession of a soft goal and the inability against a half decent team to put away their chances at the other end.

In this instance, they took it to extremes at the decisive moments with the own goal that decided it not the sort of thing that should ever really happen in international football. Katie McCabe might well say the same about the penalty she missed.

The Arsenal player should have had another an hour in but who knows, even if the Croatian referee had given that or handed Lyubov Shmatko a second yellow for the foul on Denise O’Sullivan that had provided Vera Pauw’s side their first, the visitors might not have won. Ireland just seemed to be having one of those days.

When Ukraine had been beaten in Dublin last year, it had seemed like a major breakthrough, a first ever win over second seeds in a qualifying group game, and the three points put Ireland in a driving seat of sorts.

The odd bit of bravado early on aside, everyone has always known that the Germans were going to top this table but the victory last October meant that second and perhaps even automatic qualification was achievable. Ireland’s record on the road in the games that mattered since has left them needing favours to do it now.

Well, they could beat the Germans in December but nothing in this game suggested it is likely.

The real pity of it is that Ukraine looked entirely beatable in a game they had to win. Ireland, however, gifted them a goal which spared them the need to ever commit themselves much to attack from the 25th minute on and made life very difficult for a side now chasing the game.

On an individual basis, after a week in which several first-choice players were sidelined by coronavirus, Ukraine’s goalkeeper and a couple of those immediately in front of her looked decidedly poor but they worked hard, defended in numbers and, as the game went on, seemed spurred on by the prospect of a critically important victory.

As a spectacle, the last 15 minutes were atrocious, with one stoppage after another but had there been home fans there, they would have loved it. They may not have had the ball skills to do it on the day, but Ukraine knew how to win a match.

Ireland, sadly, did not. Almost every time they went forward in the first half it seemed as though they would score and there were really terrific moments like the move that led to the spot kick or Heather Payne’s curling diagonal ball beyond three defenders for Rianna Jarrett to run to four minutes before the break.

The Brighton striker should have scored then but stumbled as she turned to shoot. It was one of a long list of chances that were passed up although they became less clearcut as the game wore on and desperation increasingly took hold.

Aine O’Gorman will go down as the one who decided it with an angled back pass under a bit of pressure that wrongfooted Courtney Brosnan, ran inches beyond her extended foot and crept over the line just short of the far post. The goalkeeper must shoulder at last as much of the blame as the defender, though, for she certainly could have dived on it if she had simply realised she had to concede a free.

It will be remembered as another costly slip up in an area that has been a problem for the team and the decision to start the West Ham goalkeeper, who has not played much this season, ahead of Reading’s in-form Grace Moloney looked a poor one on the evidence here.

Even at that, Ireland should have won the game but if Ukraine now beat Greece away on Tuesday, they will, barring a huge shock against Germany in December, have plenty of time, to mull over where they came up short before getting to go all over again.

Subs: Molloy (Wexford Youths) and Barrett (Koln) for Scott and Jarrett (both 86 mins).