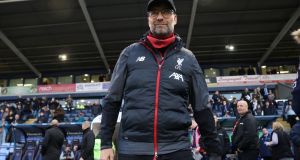 An unrepentant Jürgen Klopp has defended his decision to play Liverpool’s under-23s in next week’s FA Cup replay against Shrewsbury, insisting Neil Critchley is the best coach for the job and the Football Association did not consult “sports-responsible people” over dates for the game.

The Liverpool manager has attracted widespread criticism for refusing to field any first-team players in the fourth-round replay or take charge of a match during the club’s scheduled mid-season break.

Klopp apologised to Shrewsbury on Tuesday for taking the spotlight away from their comeback in the first meeting with his post-match comments but, on his stance against fixture congestion, a long-time concern, the manager was defiant.

Klopp hit back at the FA for stating that all clubs had accepted at the start of this season that fourth-round replays would have to take place during the first week of the mid-season “player break”. He also defended his decision not to lead Liverpool’s youngsters against the League One side on the basis that the club’s under-23s coach, Critchley, is the voice they want to hear.

In a wide-ranging response lasting over seven minutes, the Liverpool manager said of the furore: “Because we plan long-term I cannot plan when there is a real decisive period coming up. I decided three weeks ago when we were through to the next round we would have a mid-season break based on a letter we got in April 2019 where we were asked to respect this mid-season break – and we do that.

“I have to make decisions that aren’t popular, based on the situation we are in. I’m not a revolutionary guy and want to show the whole world how strong I can be. That is absolutely not the reason. If we always react in the same way we always react – ‘We have to sort it somehow and find a way to do it’ – then nothing will change and I think all people in football agree things have to change.”

He added: “If people think I am lazy because I am not at the game I cannot change that. Could I be here for the game? Of course I could but that would be a complete misunderstanding of management and coaching. It’s not about showing up for the team for two days or one day training and now I tell the boys [what to do]. It is not like this, they need their coach – and they get their coach, Critch.

“The way they [the FA] spoke about it, I don’t know who was there from which club, but I know the FA said all the clubs agreed. No sports-responsible people were there. Not a club, not a manager, not a sporting director and that’s what we need. That’s what has to change, otherwise next season we have exactly the same situation.”

No one wants to take the money away from smaller clubs, but replays are not solutions

Klopp has fielded weakened teams in the FA Cup throughout his Liverpool reign and, in December, took a full-strength squad to the Club World Cup in Qatar at the expense of the Carabao Cup quarter-final against Aston Villa. Yet the Liverpool manager claimed he “loves cup competitions”, although not the replays involved.

“I heard there were really clear opinions about the financial situation for the lower-league teams and I respect that as most of my life I played for and worked for lower-league teams,” he added. “But the replay cannot be the solution. We have to find different solutions.

“For the long term it is not a solution. The replay is really causing everyone problems. No one wants to take the money away from smaller clubs, but replays are not solutions. I know it is difficult to break with traditions and I love cup competitions. I have to see the bigger picture and that is what I do and that means the players will have their programme and I will not be there.”

Klopp, meanwhile, confirmed Sadio Mané will miss Wednesday’s Premier League visit to West Ham and Saturday’s home game against Southampton with a small muscle tear. The influential striker is expected to be fit after the mid-season break.

1 Cian Healy: ‘Realistically I got away with murder when I was younger’
2 Johnny Sexton: ‘We just know we have to be a lot better in all areas on Saturday’
3 Seán O’Brien: Anger over my parents’ break-up never left me
4 Ireland's centre will hold thanks to Henshaw and Aki’s midfield muscle memory
5 Sub-four miler Michael Woods kicks to another Vuelta stage win
Real news has value SUBSCRIBE