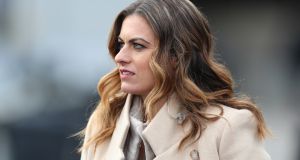 Karen Carney was working as a pundit for Amazon Prime when she was mocked by Leeds’ Twitter account. Photograph: Catherine Ivill/Getty

Karen Carney has deleted her Twitter account after remarks she made in her role as a TV pundit about Leeds United were mocked by the club’s official account and led to waves of sexist abuse.

Online attacks against the former England international, who played 144 times for her country, are understood to have increased each day since Leeds shared a clip of Carney’s commentary with their 660,000 followers on Tuesday night.

With the abuse getting “worse and worse”, according to friends of Carney, and with the majority of it sexist, she chose to delete her account on Friday. She will continue to work on TV and radio this weekend as a Premier League analyst.

Carney is hardly the first prominent woman to be forced off social media by cyberbullying. Nor is she the only professional footballer. Last week the Arsenal goalkeeper Rúnar Alex Rúnarsson deleted his Twitter account after a mistake in a Carabao Cup tie against Manchester City made him a target of his own fans.

It is the central role that Leeds have played in this incident, however, that is different and has outraged many within football.

🤔 “Promoted because of Covid”
🙂 Won the league by 10 points
👋 Hi @primevideosport pic.twitter.com/Ctz18sksZA

Speaking after Leeds’s 5-0 win over West Bromwich Albion on Tuesday night, Carney commented on Leeds’s intense playing style and suggested it could cause fatigue over the course of a season. “I actually think they got promoted [LAST SEASON]because of Covid, in terms of it gave them a bit of respite,” she said.

Taking an 18-second clip of Carney’s remarks from the Amazon Prime Video Sport broadcast, Leeds’s social media team then posted it on Twitter. They added the caption: “‘Promoted because of Covid’ Won the league by 10 points”. They also tagged in Amazon on their message, but Carney’s face was the central image.

The tweet, quickly identified as likely to cause an outpouring of invective in Carney’s direction, was immediately criticised. Fellow women in the game called out Leeds, including Carney’s fellow international Bethany England: “Atrocious behaviour by your social platform,” England wrote on Twitter. “Cyber bullying a female pundit and opening her up to mass online abuse for DOING HER JOB AND HAVING HER OPINION.”

Leeds did not delete the tweet. Instead, the club’s owner, Andrea Radrizzani, endorsed its sentiments. “I take the responsibility of the Club tweet,” he wrote on Twitter. “I consider that comment completely unnecessary and disrespectful to our Club and particularly to the fantastic hard work of our players and coaches whom were understanding on the pitch for the last two championship seasons by all stats.”

Radrizzani was supported by former Leeds players, and Leeds fans pointed out that Carney was not the first pundit to have been criticised by the club’s social media, with targets in the men’s game including the former Aston Villa player Gabriel Agbonlahor and Sheffield United manager Chris Wilder.

The abuse received by Carney was undeniable. In public messages seen by the Guardian, Carney was called a “silly bitch”, a “stupid slag” and “twat of the week” and was told to “get back in the kitchen”, or to “put your mic down and get yourself home there’s dishes to wash and clothes to iron”. Other users wrote they were “sick of this shit women pundits”, while another quipped “women’s lives matter but come on, women and football? Get kettle on love!” These were far from the worst examples.

On Wednesday afternoon Leeds released a statement saying they “completely condemned” any abuse directed at Carney and that “everyone at our club respects Karen greatly for what she has achieved in the game”. The club did not acknowledge any link between their actions and the outcome. The original tweet has not been deleted. - Guardian