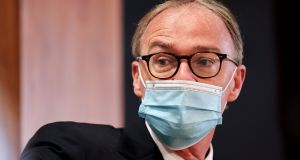 The FAI’s independent chairman, Roy Barrett, admits that he does not know when the association will finally be able to draw a line under the John Delaney era but more than a year after his departure it was clear that the former chief executive was still casting a long shadow over the organisation’s latest agm.

These events used to entirely revolve around him so some progress has been made. But the main business was still a set of financial accounts that brought further clarity to the scale of his mismanagement, and the urgent need to rebuild a collective reputation that could well take another hammering in the event that the ongoing ODCE investigation leads to a prosecution of the 53-year-old.

“From a board perspective, we can’t change the past,” said Barrett after an online meeting attended by around 120 delegates had concluded. “We can only change what we do today and in the future. This is where the focus is and as far as I am concerned and as far as the board is concerned what happens with the ODCE and elsewhere is a parallel process.

“I think the reputational damage to the association has been hugely significant,” he continued. “That’s actually not going to change. What will change are the actions and behaviours of the organisation. There are a lot of new people involved who have nothing to do what went on in the past.

“If there are a series of outcomes from that that we need to deal with, though, we will deal with them at that time. But there is nothing that I or anybody else can do to influence that, so to be frank I don’t spend much time thinking about it.”

There were unwitting echoes over the course of the day of the Delaney era meetings with current finance director Alex O’Connell getting to repeat what was pretty much an annual claim by his predecessors to delegates that the financial projections before them had been prudently put together with conservative assumptions all around.

The figures actually now seem worse in many ways with current liabilities up to €76.1 million at the end of last December, according to O’Connell. A lot more has been borrowed since but the difference, of course, is the numbers are at least now credible and accounting policy at the association is no longer driven by the need to make one man look good.

There were big differences from the old days too, like questions, with several delegates effectively criticising the way in which a consultation process intended to feed into the latest version of the association’s programme of governance reform has been conducted.

Barrett gave the impression that time pressures were down to external stakeholders who have been urging speedy reform even as delegates complained that the process has been so rushed of late that emailed suggestions, intended to shape it, seem to have been ignored.

There was something approaching an apology followed by a statement to the effect that the deadline, which is only 10 days away, will still be adhered to. It was not all that much more reassuring with regard to the new era of openness and transparency than Barrett’s reference in his own address to a process of ongoing board improvement, which really didn’t sound like it amounted to much when he was asked for detail; or the fact that the accounts had been published during the World Cup draw, something he admitted didn’t look great even if, he maintained, no sleight of hand had been intended.

Either way, there are certainly those around the organisation who are critical of the way he operates but even they are relieved that the results have included enough new money to keep what had become a deeply dysfunctional show on the road.

A good deal more public money is likely to be needed, he acknowledged, if the coronavirus crisis persists much into 2020 but the hope is that at least some spectators might be allowed into games by the time the senior men’s team plays again in March. So much keeps changing, though, that nobody is actually counting on it.

Addressing the association’s commercial revenues will be a key task for recently appointed chief executive Jonathan Hill, meanwhile, and the former Euro 96 and English FA marketing man certainly sounded like he believes he is up to the task.

Hill expressed satisfaction with the way he has been settling into the role over the past couple of months and told delegates that he now feels “well placed to drive the association forward in 2021”.

First up, it seems, is an attempt over the coming days to persuade the Government allow people play the game again after which there are key sponsorship deals to be sorted and, with Barrett, the completion of the governance reform to be overseen in the coming weeks.

That issue might still prove contentious enough for the pair to have their talents for managing internal dissent tested. The scale of the other problems they face, increasingly make it feel as though that was about the only thing Delaney was genuinely good at.