On a memorable birthday run with my dad in 1986, I discovered the joy of running 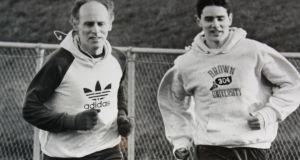 Ask anyone with a fancy degree in these matters what is the single most important factor in becoming joyous with what you do in your life and the answer invariably is make sure you chose your parents wisely.

It’s no guarantee, and there are always exceptions, only there’s no doubting our parents have given their four children plenty to be joyous and thankful for - and perhaps in my case, any of it as a runner explained by the fact my dad was physically within the act itself while I was being born on St Stephen’s Day, 1971. Now read on.

It was a Sunday, and as memory serves them well they’d just come home from Mass, Dad packing up his running spikes in readiness for the Waterhouse Byrne Baird Shield, the oldest and longest consecutively run club cross-country race in the world, when my mother told him she thought she was going into labour.

“Probably just too much Christmas turkey,” he told her. “Lie down there on the couch, I’ve got to run” – which in 1971 was a polite way of saying I’ll be home when I’m home. And run he did, jumping into their Volkswagen Beetle and driving to the Phoenix Park for the 10-mile handicap cross-country race first started by his club Donore Harriers back in 1896.

The Waterhouse Byrne Baird Shield has been running every year since (with the exception of 1916, in part because so many Donore members were away in the trenches of World War I), and since then always on St Stephen’s Day, starting and finishing at the same tree beside the Dog Pond, taking in a two-mile loop around the old horse gallop.

In 1971, close to his last running prime, dad’s aim wasn’t just to run but to win, which he very nearly did, setting a course-record from scratch, only to be denied outright victory by Willie Smith, a younger Donore clubmate with a 3½ minute handicap, who won by 13 seconds.

As part of the old race tradition, all the runners then adjourned for some post-race refreshments around Islandbridge, his own particular St Stephen’s Day neatly completed when the RTÉ Radio evening news bulletin announced his record-breaking run and narrow defeat in the Phoenix Park, along with the birth of his third child.

The Waterhouse Byrne Baird Shield has seen plenty of celebrated runners over the years, including Frank Cahill: born in 1900, making his race debut in 1923, Cahill ended up running for 52 years without any success, suffering several narrow defeats along the way. Until St Stephen’s Day of 1976: then rising Donore runner Eamonn Coghlan, set to start from scratch, was still finishing breakfast at home in Drimnagh, when Cahill started out on the first of his five, two-mile laps.

Within sight of the finish, Cahill fell over, his concerned club mates certain another defeat had been snatched from the jaws of victory, with Coghlan closing fast. Only Cahill found fresh strength from somewhere to make the finish line unassisted. His heroics made the front page of The Irish Times, the day after St Stephen’s Day, where Peter Byrne noted that Irish sport had just been deprived of its “most illustrious loser”.

Three years later, Coghlan clocked the only sub 50-minute victory in the history of Waterhouse Byrne Baird Shield, which due to Covid-19 may not be happening on this St Stephen’s Day, for the 124th year, but will certainly happen before next year is out. It was postponed before in the 1960s due to heavy snow, and this race is still born to run.

The good news is my mother insisted that Stephen was far too obvious a name for anyone born on St Stephen’s Day, so my dad suggested naming me after a runner instead.

“Who?” she asked, which is when he remembered a close contemporary and his favourite Scottish distance runner, Ian Stewart.

Already a European champion from 1969, Stewart famously won the bronze medal over 5,000m the year after I was born, at the 1972 Munich Olympics, ahead of the American Steve Prefontaine, who had led for much of the race. Pre, as he was better known, was killed in a car crash three years later, and remains a properly legendary figure in American distance running.

Stewart never liked being reminded he was the man to deny Pre that bronze medal. I know that because I mentioned it when eventually meeting him, many years later, at a glitzy bar somewhere in Monte Carlo. It was at the 2001 IAAF awards, immediately post-9/11, when many people were still afraid to fly and some free invitations were still too good to turn down.

By then, Stewart had also gone on to win a European Indoor-World Cross-Country double in 1975, and when told I was named after him he insisted with similar politeness that I buy him a drink; which of course I did, burning a deep hole in my then shallow wallet.

For many years growing up I didn’t particularly enjoy running, especially not on my birthday, and there were plenty of times too when anyone who liked to christen me the Son of The Runner was promptly reminded that I had a mother too you know.

There were plenty of other joys to being born on St Stephen’s Day, like getting to double the value of my Christmas presents, claiming they could count as a birthday present too, knowing full well no parent would leave their child empty-handed on their birthday.

It was also one St Stephen’s Day, turning 15, when my dad asked me to come along for a run around Belfield. It was one of those dark and damp December afternoons when leaving the house for any reason didn’t seem like a good idea, especially not on my birthday, but he promised to run easy, very easy, which he did, until maybe half a lap or so when he was already two strides clear and running like it was 1971 all over again.

That was the same day which also brought the realisation of the suddenly inherent joy that comes with running, and every year since that St Stephen’s Day I’ve gone for a run, for a few years running the number of miles that directly equated my age, before my age started to run away from the number of miles. Nothing beats a run on your birthday to remind you of all that.