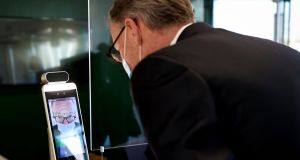 FAI chairman Roy Barrett has his temperature checked upon arriving at the FAI’s headquarters at Abbotstown ahead of the AGM. Photograph: Tommy Dickson/Inpho

New FAI chief executive Jonathan Hill has told delegates to the association’s AGM that he aims to build “a more trusted and a more respected FAI” but admits that the organisation he joined at the start of November is starting from what he described as “a low base”.

Hill, who addressed the online meeting from his base in London, said he was settling well into his new role and feels that having made a positive start to the process of building relationships with Government and other key stakeholders he is “well placed to drive the association forward in 2021”. But, he admitted, all of the work currently being done at the organisation is carried out under the shadow of “complex historical legacy issues”.

Most of these, he was polite enough not to say, relate to John Delaney’s long and disastrous reign at the association but the former chief executive barely got a mention at the 2020 edition of the event he used to so completely dominate. The exception being a reference – not by name – to the €2 million or so saving the association estimates that it made by securing the former CEO’s departure for €462,000 last year.

That was, however, just about the only upside to finance director Alex O’Connell’s presentation on the association’s accounts for 2019. He explained that they taken far longer than expected to compile because of the legacy issues new auditors Grant Thornton found themselves confronted with when they took over from Deloitte.

Having issued a protective writ in the High Court against Deloitte in June of this year, FAI chairman Roy Barrett confirmed that the association will decide early in the new year as to whether to pursue an action against the firm.

In his address, O’Connell acknowledged what had become increasingly apparent during the latter days of Delaney’s time; that the association was keeping the financial show on the road by drawing down future income in advance (deferred income went from €18.2 million at the end of 2015 to €28.1 million on December 31st, 2019) and putting bills on an increasing long finger (the amount owed to trade creditors went from €10.3 million to €16.4 million over the same period).

The association is, he said, “taking steps to reverse that upward trend” but while he certainly suggested that things have been put on a more structured footing these days, there was only so much he could do to paint a situation in which the association had recorded current liabilities of €76.1 million at the end of last year in a positive light.

Since then, a lot more has been borrowed, although arrangements have been made to repay much of it over the next 20 years or so.

O’Connell claims that things will substantially improve within three years but the figures under discussion here involved a €5.1 million loss and net liabilities of €5.7 million. When it was suggested by supporters’ representative Tony Considine that the new FAI publishing the accounts slap bang in the middle of the World Cup draw a few weeks back sort of smacked of the old FAI, Barrett admitted that the timing had been “unfortunate” but denied any attempt to sneak all the bad news in under the radar.

Hill’s commercial experience at the English FA and elsewhere is intended to play a key part in improving the situation and he certainly expressed some confidence with regard to his own ability in this department. But he admitted that things are not going to get sorted overnight, especially if spectators are not allowed to return to games.

Tickets and hospitality had, he noted, been worth €11 million to the association in 2018 and while the FAI is working on contingencies that involve crowds in stadiums being allowed by as early as March, he acknowledged that that can clearly not be taken for granted and that substantial further Government support, including to the League of Ireland, may be required over the course of 2021.

In the meantime, he will be working to renew current sponsorship deals, “because it is easier to renew a deal with an existing sponsor than to go out into this very competitive market”.

Before that, the association will make their case to Sport Ireland by the weekend on getting the playing of football restarted at all levels.

“We need to see contact training as much as we need competitive games,” said Hill in response to a question. “We will always be respectful of the guidelines that the medical experts lay down to us . . . but I too don’t know the difference between being in a school classroom and being on an open soccer pitch.”