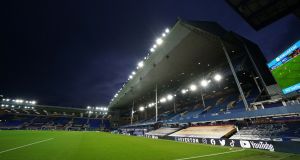 An outbreak of further positive Covid-19 cases at Manchester City forced their Premier League trip to Everton to be postponed just four hours before kick-off on Monday. Three days after Kyle Walker and Gabriel Jesus were among four individuals to return positive tests the club announced another round of testing had “returned a number of positive cases”.

City lodged a request to postpone the match on Monday morning with confirmation coming around 4pm after a hastily-arranged Premier League board meeting.

“With the security of the bubble compromised, there posed a risk that the virus could spread further amongst the squad, the staff and potentially beyond,” said a statement from City.

“Based on strong medical advice the Premier League, in consultation with both clubs, has decided to postpone the fixture.”

The Premier League, in agreeing to the postponement, insisted the health of players and staff was paramount.

Second-placed Everton, who could have gone level on points with neighbours Liverpool at the top of the table with a victory, had no say in the decision to postpone the match. Having to call off the game at such a late stage was also a huge disappointment to 2,000 supporters as Goodison Park is one of only two Premier League grounds – the other being Anfield – allowed to admit fans.

On Monday night Everton asked for further information from the Premier League about how the decision was reached.“Whilst Everton will always have public safety uppermost, we will be requesting full disclosure of all the information that Manchester City provided to the Premier League so the Club can be clear on why this decision was taken,” said the club in a statement.

The fixture is only the second Premier League game to be called off due to positive tests for coronavirus this season. The match between Aston Villa and Newcastle, due to be played on December 4th, was postponed due to cases within the Newcastle camp.

City’s training ground has been closed for the foreseeable future with the rest of the squad having to undergo extensive further testing before any potential return can be considered.