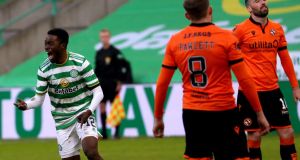 Celtic set themselves up for the keenly-awaited Old Firm clash in the new year with a solid 3-0 Premiership win over Dundee United at Parkhead.

Ismaila Soro opened his scoring account for the Hoops in the 23rd minute before fellow midfielder David Turnbull added a second with a drive five minutes before the interval.

French striker Odsonne Edouard scored a delightful third in the 75th minute, with the only downside for boss Neil Lennon being the injury to returning defender Christopher Jullien who was carried off on a stretcher after crashing into a post in saving a likely United goal.

The champions have three games in hand over Rangers, who are 16 points clear at the top ahead of the Ibrox encounter on January 2nd.

The Light Blues’ 2-0 win over St Mirren in Paisley means both Glasgow giants go into the game in good form for what could be defining fixture in the title race, with the Hoops aiming for 10 in a row this season.

Eyebrows were raised before the game with the news that Lennon had recalled Greece goalkeeper Vasilis Barkas, a £5million summer signing from AEK Athens, after a five-game spell on the bench at the expense of young Northern Irishman Conor Hazard.

There was a minute’s silence before the game in tribute to the late former Dundee United title-winning manager Jim McLean who died on Boxing Day at the age of 83.

United keeper Benjamin Siegrist made his first save after four minutes from Edouard who had tiptoed into the visitors’ box before getting a shot away.

The opening goal came when Soro, the 22-year-old Ivorian midfielder signed from Bnei Yehuda last January who was again playing in place of skipper Scott Brown, found space outside the United penalty area and swerved in a shot which sped high past Siegrist and into the net.

The Tannadice keeper then pulled off a great save from striker Leigh Griffiths’ volley from point-blank range after he had latched on to a Turnbull pass, before Edouard fired the rebound wide.

There was a penalty claim by United in the 37th minute when the ball looked as if it might have hit Jullien’s arm inside the box but referee Willie Collum played on and to the visitors’ consternation they were soon 2-0 down, Turnbull firing in a low drive from just outside the box which went in off a post.

It was the 21-year-old’s third goal in three games and his fine finish gave the home side a comfortable lead.

The Taysiders almost reduced the deficit two minute after the interval when Marc McNulty ran on to a Lawrence Shankland pass and dinked a shot over Barkas. Jullien got back to clear off the line but then clattered into the post and had to be replaced by Nir Bitton.

Siegrist saved a powerful strike by Turnbull before a United break saw Shankland set up Clark but despite time and space the former Rangers striker cleared the bar with his shot from 16 yards.

Griffiths and Callum McGregor had efforts on the United goal before Edouard ran on to a well-timed Griffiths pass and lobbed the ball over the despairing Siegrist to seal the win.