José Mourinho: Structures are not adequate at Man United 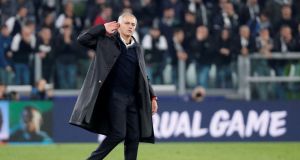 Jose Mourinho: “We are not any more in a time when the coach by himself is powerful enough to cope,” he said. “The coach nowadays needs a structure, he needs a club organised in a certain way.” Photograph: Stefano Rellandini/Reuters

José Mourinho has used his first major interview since Manchester United sacked him to suggest that his former club does not have the structure in place to cope with the demands of modern football, with player power now heavily influencing the game.

Appearing as a guest analyst on beIN Sports, he reflected upon his time at Old Trafford and said his second-place finish last season was “one of the best jobs of my career” because of what he described as influences “behind the scenes”.

“People might say: ‘This guy is crazy, he won 25 titles and now he says that second position with United was one of his best achievements in football,” Mourinho said. “I keep saying this because people don’t know what is going on behind the scenes.”

He went on to indicate the set-up at Old Trafford did not provide the support he felt he needed.

“We are not any more in a time when the coach by himself is powerful enough to cope,” he said. “The coach nowadays needs a structure, he needs a club organised in a certain way.

“The club must have an owner or a president, a CEO or executive director, a football director and then the manager. This is the structure that can cope with all the problems modernity is bringing all of us.

“A club must be very well organised to cope with all these kind of situations where the manager is only the manager and not the man that is trying to keep the discipline or is trying to educate the players.”

United do not have a director of football but intend to appoint one.

“Sir Alex Ferguson used to say the day a player is more important than a club, goodbye,” Mourinho continued.

“Not any more. The manager ought to be there to coach the players, not to keep the discipline at any cost. You need a structure to protect the manager and keep everything in place, so that the players do not arrive in a situation where they feel more powerful than they used to be . . . Everything good I did with players is not news any more. News in modern football is when you have problems.”

Those words are already being interpreted as a thinly veiled attack on Paul Pogba, although Mourinho also had issues with player resistance at Real Madrid and Chelsea.

His verdict on his time in Manchester seems to be that it was an unwinnable situation because United are not set up along the same lines as Pep Guardiola’s Manchester City, yet that much must have been clear to him from the start.

In any event the experience does not appear to have daunted him or put him off trying again.

Mourinho claimed winning the treble with Internazionale in 2010 as his greatest achievement to date. He never seemed particularly happy or comfortable during the two years in Italy that separated his spells in England and Spain, though he named that Inter side as the best he has managed.

“I have to say Inter because they won everything,” he said.

“I have to be objective, and be respectful to them, because that team won all the competitions from day one until the last day. They won the treble, they beat the best team in the world when they won 3-1 against Barcelona, they beat Bayern Munich in the final, won three finals in 10 days and won the league in Italy with a fantastic number of points.

“I have to say they’re the best team, even if Real Madrid won the Spanish league with record points and goals.”