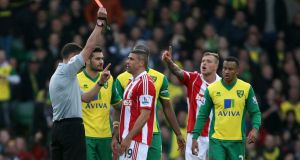 Stoke have lost an appeal against Republic of Ireland striker Jonathan Walters’ red card in the 1-1 draw with Norwich on Saturday, the English FA has announced.

Walters was dismissed in the 78th minute of the Barclays Premier League contest at Carrow Road for a foul on Canaries midfielder Alexander Tettey.

“Walters was dismissed for serious foul play during the game against Norwich City on March 8th, 2014. His three-match suspension will commence with immediate effect.”

Walters’ sending off came five minutes after he had netted Stoke’s equaliser from the penalty spot. Following the match, Potters boss Mark Hughes expressed his unhappiness at referee Andre Marriner’s decision to dismiss Walters for his high challenge on Tettey.

”I’ve looked at the incident and there is contact and Jon has accepted that he caught him,” Hughes said.

”But both players had their feet high and I think the punishment was too harsh for the crime. Both players just intended to win the ball and Jon just caught him with his follow through.“

Stoke already have midfielder Charlie Adam serving a three-game ban, which began with the Norwich fixture, after he was retrospectively punished following an incident in their previous outing, a 1-0 home win over Arsenal — in which Walters also scored a penalty.

Adam was charged with violent conduct after he appeared to stand on the leg of Gunners striker Olivier Giroud.

Referee Mike Jones did not see the incident during the match but it was picked up on television footage and, although the Potters contested the FA’s decision to punish the player, an independent panel upheld the charge.