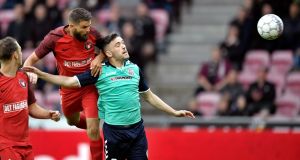 A classy FC Midtjylland hit Derry City for six in Denmark, the Danes putting this game to bed with a penalty just before half-time to lead 3-0. Midtjylland, boasting international players, were always in control and could have won by more.

Derry got off to the worst possible start when conceding the opening goal after just four minutes. Nicky Low conceded a free-kick just outside the penalty area and when the ball was delivered into the danger area, Marc Dal Hende rose unchallenged to head home.

Derry settled and while Aaron McEneff and Nathan Boyle both had chances to score, they failed to hit the target.

Midtjylland doubled their lead in the 15th minute and, again, it was very much down to a case of poor defending as Kristian Riis raced into the box to sidefoot the ball home.

Derry refused to allow their heads drop with young Ben Doherty threatening while Rory Patterson stung the palms of Midtjylland’s debutante goalkeeper Jesper Hansen in the 24th minute with a ferocious shot.

Derry conceded that killer third goal three minutes before the break. Goalkeeper Ger Doherty, who did well to deny towering striker Paul Onuachu in a one-on-one situation in the 35th minute, turned villain in the 42nd minute when he brought the Nigerian international down. The Austrian referee pointing immediately to the spot. Up stepped Midtjylland captain Jacob Poulsen who netted for a 3-0 advantage.

The home side then made it 4-0 on 59 minutes. A long ball from Dal Hende saw Simon Kroon race forward and he drove the ball home. The same player made it 5-0 just minutes later as Derry continued to struggle.

The visitors refused to give up and they were rewarded in the 66th minute. Nathan Boyle dispossessed a defender and when he squared the ball to Ronan Curtis, he made no mistake when beating Hansen from close quarters.

Poulsen crashed the ball off the upright in the 79th minute before substitute Bozhidar Kraev made it 6-1.